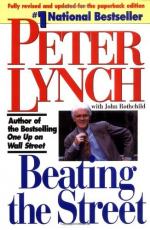 Peter Lynch (director)
This Study Guide consists of approximately 31 pages of chapter summaries, quotes, character analysis, themes, and more - everything you need to sharpen your knowledge of Beating the Street.

Peter Lynch, manager of Fidelity Investment's incredibly successful Magellan Fund from 1977 to 1990, writes this book to provide investors with insight into his investment methodologies and tactics. He begins with a tale about a group of 7th graders who make mock investments as part of their class. The children are instructed to invest in companies they own and to research their choices to explain to their classmates why they made them. The 7th graders do extremely well, beating the S & P 500 index significantly. Their story demonstrates that even a child can invest successfully if they choose companies they are familiar with and do their research. Knowing one's investments is the main theme of the book.

Next, for those who might be timid about investing in stocks, Lynch explains why stocks are a better investment than bonds or certificates of deposit. While a conservative investor may prefer a bond that provides a guaranteed return on investment, at the conclusion of the bond period, the investor is returned the exact amount initially deposited. When inflation is accounted for, the investor has less money than when he started. On the other hand, a stock with a dividend will pay a return while it is owned, and will almost certainly increase substantially in value over a lengthy period, like ten years.

The next few chapters chronicle Lynch's years managing Magellan. He explains why he chose certain stocks and how they performed. When he begins, Magellan is a small, closed fund of about $100 million that is not doing particularly well. Through investments during the early 80s in companies like Chrysler, Ford, GM, Philip Morris, Volvo, General Electric and Fannie Mae, Magellan grows into a huge fund. By 1987, Magellan is up to $10 billion.

The second half of the book details how Lynch researched and chose the 21 stocks he recommended for the 1992 Barron's Magazine Roundtable stock guide. The first and most natural place, to look for stocks is the retail sector. The average person likely eats out often and shops regularly. These mundane activities can actually lead to good stock picks if the shopper pays attention to new and potentially successful stores and chains. If the investor can get in on a business as it is in its prime growth phase, which ordinarily lasts several years, the retailer can be very profitable.

Next, Lynch demonstrates that investing in depressed industries or situations can be very profitable. An area where other investors are scared away because of gloomy news is often the best place to find undervalued stocks. The depressed real estate market of the early 1990s was a perfect example. By digging deeper into the seeming problem, he found that there was no problem at all. There are always some good companies to be found in lousy markets. Lynch advises looking for thrifty, no-frills companies that pay close attention to the bottom line and that treat their employees well. A well run company in a lousy industry may have the added advantage of being able to buy up some of its failing competitors. Savings & Loans had a terrible reputation in the late 1980s and early 1990s. There were, however, some good S & Ls to be found amongst the industry's devastation.

Cyclical stocks are another favorite of Lynch. Cyclicals are industries with a somewhat predictable pattern of boom to recession and then back again. Lynch analyzes how to watch and track a cyclical and what sort of research will result in successful cyclical investment.

Lynch analyzes his history with Fannie Mae, his number one stock over his tenure at Magellan. Fannie Mae started as an unnoticed stock selling for almost nothing. Lynch watched them grow and mature into a giant. They perfected the "mortgaged-backed securities" market and became extremely profitable buying and repackaging mortgages.

Lynch concludes the book by re-examining the performance of his recommendations at the six month mark. Always re-evaluating investments is necessary to successful investment. By researching a company's future prospects and plans, one can make an informed decision on whether to maintain the investment, invest more, or sell. Oftentimes, additional research into one's investments can produce new companies in which to invest.

More summaries and resources for teaching or studying Beating the Street.