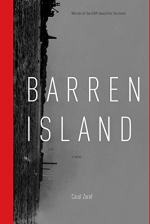 Carol Zoref
This Study Guide consists of approximately 65 pages of chapter summaries, quotes, character analysis, themes, and more - everything you need to sharpen your knowledge of Barren Island.

Marta Eisenstein, at the age of 80, retells the story of her childhood and adolescence growing up on the small, often overlooked island of Barren Shoal. The island, known for its putrid smell that wafts across Jamaica Bay and can be detected from New York City proper, is home to a motley collection of impoverish immigrant families, whose primary place of employment is at the island's only factory, which renders discarded animal carcasses into glue and grease, hence the island's distinct stench. The vast majority of the novel takes place in the past, structured as a chronological, mostly linear first-person retelling of Marta's own life. However, the elderly Marta often offers observations, criticisms, commentary, or other interjections in the present. In many instances, the perspectives of both the Marta, the child, and Marta, the 80-year-old woman, are intertwined and presented at once. As such, the narrative often transitions suddenly from past tense to present tense.

Marta's mother and father are Jewish immigrants from Zyrmuny who move to Barren Shoal because of the promise of accessible housing as part of the factory's compensation plan. Marta has an older brother, Noah, a intelligent but introverted boy, and a younger sister, Helen. Marta's account focuses on her childhood beginning at around age seven, when the United States is at the beginning of the Great Depression. Though conditions on the island are generally extremely poor, from the heinous smell to the presence of garbage barges to the appalling condition of the schoolhouse, The Eisenstein's are able to cobble together some comforts, such as Rachel Eisenstein's extensive and abundant vegetable garden. Marta soon makes a lifelong friend in her neighbor, a young Greek girl named Sofia, and the two are inseparable for years.

As the factory proves to be a more dangerous and unjust working situation, some men on the island begin to get involved with labor organizing and unionizing. Noah in particular, along with his friends Yorgos and Joey, strive to unionize the factory workers and meet with leading labor organizers across the bay in Manhattan.

Tragically, Marta's younger sister dies in scalding bath water, an event that shatters the stability she once enjoyed in her family life. Marta's mother becomes grief-stricken, unable to speak or even leave her bedroom most days for years. Marta continues to mature, but feels an increasing sense of loneliness and yearns for purpose and meaning in her life. Marta's life is inundated by fears of rising Nazism in Germany, which leads to desperate letters asking for help from relatives still in Zyrmuny. Noah's involvement in the unions lead to a violent scene in a labor protest, and Sofia's foray into her burgeoning sexuality is marred by an unwanted pregnancy and subsequent abortion.

In a life plagued by moments of seemingly senseless suffering, Marta strives to make her life meaningful by putting together supplies for anti-fascist forces in the Spanish Civil War, and later by stealing money to attempt to pay for her European family's safe passage to the United States. The looming threat of eviction coupled with rising war-time tensions send Marta's life into an existential chaos, yet she nonetheless remains committed to confronting her past and preserving its memory, fearing that if she cannot acknowledge the events of her own life, then any hope of deriving truth and meaning from years of suffering will be shattered.

Though Marta's family is eventually forced to relocate off of Barren Shoal, giving her an opportunity to make a new, better life elsewhere, Marta's understanding of her own past is integral for contextualizing the suffering of others, and the ramifications of a world torn apart by international war. At the end of the novel, Marta expresses some defeat in acknowledging that without having lived it, one could never fully grasp the truths of her experiences. Nonetheless, she bears the burden of preserving the memory of Barren Shoal, as not to lose it to the obliterating forces of history and time, protecting the lives of everyone she once knew from having lived in vain.

More summaries and resources for teaching or studying Barren Island.