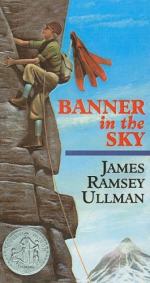 James Ramsey Ullman
This Study Guide consists of approximately 49 pages of chapter summaries, quotes, character analysis, themes, and more - everything you need to sharpen your knowledge of Banner in the Sky.

Banner in the Sky Summary & Study Guide includes comprehensive information and analysis to help you understand the book. This study guide contains the following sections:

This detailed literature summary also contains Topics for Discussion and a Free Quiz on Banner in the Sky by James Ramsey Ullman.

Rudi Matt is a sixteen-year-old boy who desperately wants to climb the Citadel - the mountain that his father died on fifteen years earlier. Living in a small Swiss mountain village, he is constantly reminded of his "legacy." Unfortunately, Rudi's mother and uncle want him to have nothing to do with his father's occupation and have forbidden Rudi from climbing. Ignoring this, Rudi is out on a glacier when he saves the life of a famous climber and gains an ally in his quest to climb the Citadel. Rudi goes up against his family and has to fight some inner demons up on the treacherous slopes. Will he succeed?

As the story begins, Rudi sneaks out of his job in the hotel kitchen to climb up to the base of the Citadel, a treacherous mountain that looms over his village of Kurtal. The mountain is believed to be cursed. Rudi's own father died on its slopes just fifteen years earlier while trying to climb it. No one has attempted this task since. Rudi passes his father's grave; he believes none of the myths about the Citadel. He knows he is risking his mother's wrath by exploring high up on the slopes. He is walking towards the mostly unused base camp for the Citadel when he hears a voice coming out of a fissure. He finds that a man is trapped on a ledge about twenty feet down. The man asks Rudi to go for help, but Rudi knows that they would not be back by nightfall. The man would probably freeze by then. He cleverly makes a "rope" out of his clothes and braces himself as the man climbs up and out.

Captain Winter introduces himself and is shocked to find that a sixteen-year-old boy has rescued him. A world-renowned climber, Winter takes an immediate liking to Rudi and finds that he is the son of Josef Matt - the man who died on the Citadel. Both Winter and Rudi find that they have wanted to climb the Citadel for years. They hike down towards Kurtal, and Rudi asks Winter not to mention his brave deed because his mother will be angry that he was on the mountain. Winter reluctantly agrees.

Back at the hotel, Rudi is caught lying. He was on the mountain instead of where he said he would be. His Uncle Franz and his mother are furious but relent somewhat when Captain Winter tells them that Rudi saved his life. At Winter's insistence, Franz agrees to let Rudi join them on a smaller climb, the Wunderhorn. Winter graciously buys Rudi new equipment, and the boy is overjoyed.

The men climb to a hut at base camp and sleep for the night. Rudi is still elated at the thought of a "real" climb. He holds his tongue at many times when he wants to give his opinion. They climb high on the mountain to get a look at Winter's real goal. From the altitude, they have a unique vantage point to examine the upper slopes of the Citadel. They discuss climbing issues. Rudi desperately wants to impress the men and tries to find a better way down. He ends up foolishly walking across a narrow lip of rock that crumbles and leaves him stranded. He has to be rescued by Winter and his furious uncle. Rudi is devastated and humiliated. He assumes he will never climb again.

Back at work, the head cook Teo tries to lift Rudi's spirits. He is the only surviving member of Josef's expedition. He is crippled but still mobile enough to show Rudi the ropes. Teo takes Rudi to climb a small peak on their day off. He shows Rudi valuable techniques on how to climb as a proper guide, not as a solo climber. Together, Rudi and Teo climb the mountain. With Teo's injury, Rudi is forced to climb while partially assisting the old man.

Captain Winter tries to enlist Franz as his guide for a climbing expedition to the Citadel, but Franz refuses. Winter travels to the nearby town of Broli to hire arrogant Emil Saxo as a guide. Rudi sees the smoke from the usually deserted cabin high on the slopes and realizes what has happened. He quietly takes his equipment and hikes up to join the two men. Upon arriving, Rudi lies and tells Winter that he has his uncle's permission to be there. The men allow Rudi to climb with them to reconnoiter the area under the Fortress. Up on the slopes, they are caught in an avalanche and buried. Rudi and Saxo slowly dig themselves out and find Winter trapped but unharmed, other than a cut on his head.

Franz receives word that men have been spotted climbing the Citadel and realizes that Rudi is missing. He gathers up a group of guides (including Teo) and hikes up toward the cabin. In the meantime, Winter, Saxo and Rudi reach the cabin, and Winter sends Rudi back to Kurtal for supplies while they return to Broli. Not admitting his lie, Rudi decides to climb for the Fortress alone. He makes his way to the massive wall and finds a route off to the left side where he climbs to the top. Unfortunately, he ignores the lateness of the day and is caught in a storm at the bottom of the Fortress. After almost falling off the mountain several times, Rudi retreats and finds shelter in a small cave. He realizes during the long, cold night that it is the same cave his father died in. After fighting panic, he becomes at peace and climbs down after dawn.

Back at the cabin, Winter and Saxo return to find the Kurtal guides, who accuse them of taking Rudi. Winter explains to Franz that he sent the boy to town, but then Rudi walks in exhausted and exclaims that he actually climbed above the Fortress. Rudi rests and then explains in detail how he conquered the Fortress. The men begin to argue about which town will overcome the mountain, Broli or Kurtal. Winter finally convinces Saxo and Franz that they can work better as a team. Rudi, Winter and Teo convince Franz that the boy deserves to be in the climbing party. The decision is made: Winter, Saxo, Franz and Rudi Matt will ascend the Citadel.

After quickly retracing the now familiar route to the base of the actual mountain, Rudi is humbled to be allowed to lead the group past the Fortress. His uncle is proud when they sit on top and take a break. The other men take turns leading from then on. Roped together, as they encounter especially difficult stretches, one man goes ahead while the other three brace on the rope for safety. Winter, Saxo and Franz all have moments to show their respective talents to lead the team upwards. They find a relatively sheltered location and pitch their tents for the night. The next day, the team encounters an obstacle called the Needle. All three men exhaust themselves trying to climb over it. Captain Winter becomes sick with exhaustion. Then Rudi climbs through a small cave to reach the top. As they sit on what looks like the last hurdle before the summit, it becomes apparent that Winter cannot proceed. They rest for the night. The next morning, Rudi sees that Saxo has left to climb the summit for himself. He follows, worrying about what his uncle will think about him. Near the peak, Rudi catches up with Saxo on a narrow ridge. Saxo tries to push Rudi and falls, badly hurting his arm. Rudi climbs down to Saxo and realizes the man can't climb up. He takes Saxo down, giving up his hope of reaching the summit first.

Meanwhile, Winter and Franz set out after Rudi and Saxo. They see Rudi's pack on the narrow ridge. Fearing the worse, they press on. They soon reach the summit and are elated when they meet Rudi and Saxo back at their upper camp. With great difficulty, the group descends together back to the hut, mostly carrying Saxo. The town celebrates their return, and Rudi sees that Captain Winter placed his father's shirt on the peak as a banner. Winter tells the townsfolk that Rudi was there. Even Rudi's mother is proud.

More summaries and resources for teaching or studying Banner in the Sky.

Banner in the Sky from BookRags. (c)2022 BookRags, Inc. All rights reserved.