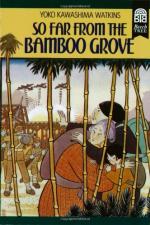 So Far from the Bamboo Grove Overview

So Far from the Bamboo Grove Summary & Study Guide Description

So Far from the Bamboo Grove Summary & Study Guide includes comprehensive information and analysis to help you understand the book. This study guide contains the following sections:

This detailed literature summary also contains Further Study and a Free Quiz on So Far from the Bamboo Grove by Yoko Kawashima Watkins.

Eleven-year-old Yoko and her family are stationed in North Korea during World War II while Yoko's father works as a Japanese government official in nearby Manchuria.

They live in a bamboo grove in Nanam until the Russian and Korean Communists invade their country and escalate their war against Japan. Because Yoko's father protects Japanese interests, the family knows they are in particular danger and must flee the country as soon as possible. So Far from the Bamboo Grove tells the story of their escape. Yoko, her mother, and her sister Ko learn of the urgency of their escape one night as Corporal Matsumura comes to their house and instructs them to leave immediately. Frightened and heartsick at having to leave Yoko's father at work in Manchuria and her brother Hideyo at work in an ammunitions factory, the three women embark on their journey alone. They travel by train and on foot. They hide by day and they walk by night. They withstand gunfire, disease, poverty, and near starvation.

Finally, they arrive in Seoul, travel by train to Pusan, and board a ship to Japan. Once in Japan, however, Yoko's mother dies from exhaustion and defeat, and Yoko and her sister Ko must learn to survive on their own. Their strength and determination leads them to success. Japan loses the war, but Yoko emerges victorious. Watkins's gripping tale of courage and strength recounts the plight of refugees through the story of Yoko, Ko, and Hideyo, many of whom withstood similar harrowing ordeals and struggled to survive during years of political unrest.