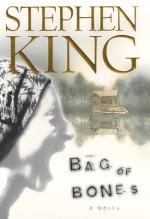 Stephen King
This Study Guide consists of approximately 54 pages of chapter summaries, quotes, character analysis, themes, and more - everything you need to sharpen your knowledge of Bag of Bones.

This detailed literature summary also contains Topics for Discussion and a Free Quiz on Bag of Bones by Stephen King.

Bag of Bones by Stephen King is a novel that contains King's trademark characteristics of blending reality with fiction and innuendo with supposition. It is a tale about a man named Mike Noonan who unexpectedly loses his wife in the prime of her life. She witnesses a freak accident and on her way to offer assistance, she suffers an aneurysm and dies on the street. The autopsy also shows that Johanna had a secret: she was pregnant. This event knocks the life out of Mike. He barely finishes the novel he is writing, but finds himself unable to so much as begin another one. After years of writing he suffers a block that has him physically ill if he even tries. With four novels in a safe deposit box, he is under little pressure for the next four years, but when that has passed and Mike still hasn't written a word, he begins to get anxious.

He finally decides to return to the vacation house called Sara Laughs at the lake he and Jo had spent summers in. It is his first return in four years and he has had numerous nightmares about it. None of these nightmares manifest as he arrives however and he is warmly welcomed by the locals at first. Then he meets Kyra Devore, a precocious toddler who's frantic mother Mattie isn't far behind. When he returns the child to her care, he discovers that she also lost her spouse unexpectedly just months earlier. Immediately taken with her outgoing charm, when he learns that she is fighting a rich and powerful father in law for the custody of her daughter, he steps in to help, offering the services of a lawyer. It is a simple gesture but the locals are not so charitable. To complicate his life further, Sara Laughs appears to be haunted. Several entities vie for his attention. Poltergeist activity is ongoing at Mattie's trailer as well, but Mike doesn't tell her they share that too. Already, the three have a deep and unusual bond able to read each others thoughts and as Mattie's feelings for Mike grow, she makes no secret of them, leaving an open invitation to come to her at night but Mike resists his feelings for her until her father in law dies. Then, in a celebration held at her trailer with Mike, their lawyers John and Rommie and private investigator George, Mike finally yields to his feelings, promising to come to her that night. The long time locals who are attending her father in law's funeral change Mike's life when they drive by her trailer firing multiple rounds from their car. Mattie is killed, and everyone but Mike and Kyra are injured by flying bullets.

All the while, the poltergeist activity increases to a crescendo. Sara Tidwell, the original owner of Sara Laughs, is just one of the vengeful entities looking for justice and it is up to Mike to unravel the truth before anyone else is killed. Sara is not about to rest quietly, haunting all who are descended from the men who raped and murdered her and killed her son decades earlier. In an explosive finish, Mike fights Sara and her killers in an effort to save himself, them and Kyra. Luckily for Mike, Johanna had discovered the horrible truth before her death, and in a series of secret visits to their summer house, has left him the information he needs. Her spirit guides him and works on both sides of the mortal plane to ensure he and Kyra survive and put the past to rest once and for all.