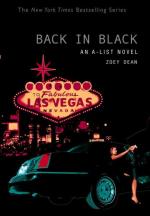 Back in Black: An A-list Novel Summary & Study Guide

John Meaney
This Study Guide consists of approximately 19 pages of chapter summaries, quotes, character analysis, themes, and more - everything you need to sharpen your knowledge of Back in Black.

Back in Black: An A-list Novel Summary & Study Guide Description

Back in Black: An A-list Novel Summary & Study Guide includes comprehensive information and analysis to help you understand the book. This study guide contains the following sections:

This detailed literature summary also contains Topics for Discussion on Back in Black: An A-list Novel by John Meaney.

"Back in Black" is part of the A-List series, several books that describe the lives of a group of wealthy and beautiful teenagers at a Los Angeles High School. In "Back in Black," this group (the eponymous A-List of the subtitle) decides to forgo the senior class trip to Washington D.C. in favor of a private trip to Las Vegas. However, their vacation will reveal secrets about everybody as the story continues.

Recounted mainly from the perspective of Anna, a recent addition to their group, the narrative begins with Anna and her friend Sam (Samantha) at the Oscars. Sam's father has been nominated for an award. When he doesn't win, the family is disappointed, but Sam's growing discomfort with her stepmother, stepsister, and even her own body becomes increasingly evident. It doesn't help that her friend Dee, a young girl with New Age beliefs, has become friends with Sam's stepmother, Poppy, and leads her and her friends in a mother-and-baby meditation.

Relieved to escape from her family situation, Sam takes her friends on her father's private jet and they set off for Las Vegas. The group includes Sam, Anna, Dee, Cammie, Adam, and Parker. Everyone is rich except for Parker, who worries about how he will pay for the trip. When they land, he immediately heads for a slot machine and, incredibly, wins $20,000. However, the casino worker realizes that his ID is fake and that he is not old enough to gamble. Parker must forfeit the prize.

Anna's friend from New York, Cyn, shows up with her boyfriend Scott, who Anna has always had a crush on. However, she is still pining for her ex-boyfriend Ben, who is away at Princeton. As their trip progresses, the imperfections beneath their perfect surfaces begin to show, but don't totally emerge until the group gets hypnotized during a performance at their hotel. There, Cammie and Adam admit that their relationship is cooling down, Anna admits that she's always had sexual feelings for Scott, and Sam watches on in amazement. The group would never find out what happened, except that Cyn unknowingly buys the DVD and shows it to them, creating several rifts within the group. In the end, Scott and Cyn break up, Cyn and Anna retain their friendship, and Adam and Cammie re-discover their feelings for one another. Sam ends up discovering Parker's secret, and pays his way for him without his knowledge.

The group must reunite as a whole when Dee is found at a mental hospital. Feeling excluded, she broke down and started babbling New-Age mysticism to a group of gamblers at a casino - wearing nothing but her underwear. The girls decide to get her home and begin the drive to the airport when Anna spots Ben, who she called several times only to receive no response. She lets the others leave without her as she spends a few more days with Ben who is in love with her, but admits that he has a girlfriend back at Princeton. The book ends on a hopeful note with Anna and Ben at the hotel together.

More summaries and resources for teaching or studying Back in Black: An A-list Novel.

Back in Black: An A-list Novel from BookRags. (c)2022 BookRags, Inc. All rights reserved.