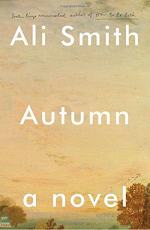 This detailed literature summary also contains Quotes and a Free Quiz on Autumn: A Novel by Ali Smith.

The following version of this book was used to create this study guide: Smith, Ali. Autumn. Pantheon Books, 2016.

Autumn is a post-Brexit novel of love, truth, and time by Ali Smith in which 32-year-old Elisabeth Demand reflects on her almost lifelong romantic-spiritual love affair with 101-year-old Daniel Gluck. As the novel gets under way, the narrator – who is never identified but who speaks to the reader as though a close friend – denotes that England in 2016 is England in the worst of times. The narrator takes a decidedly negative view of Brexit – the United Kingdom’s decision to leave the European Union – and into the divided post-Brexit social landscape, readers meet Daniel and Elisabeth. The novel weaves back and forth between the present and the past, from the time Elisabeth first met Daniel at the age of eight to the current day where she is 32 and Daniel is dying in hospice.

As a child, Elisabeth takes a quick liking to Daniel because Daniel is not only kind and intelligent, but he challenges her mind. As she grows, they have in-depth discussions about reality, stories, art, and other cultural subjects. Elisabeth’s mother, Wendy, becomes wary of the unfolding relationship between the two, thinking her daughter has a father-complex and thinking Daniel strange for wanting to spend time with a very young girl. By the time Elisabeth is 16, she realizes she is in love with Daniel, and no matter what boy or girl Elisabeth is in a relationship with, she is always distracted by Daniel. Their souls have met, and the tremendous love Elisabeth has for Daniel transcends anything physical.

Daniel, for his part, is ever the gentleman. He never takes advantage of Elisabeth, and never actually notes if he has any romantic feelings for Elisabeth. Daniel himself is reeling from a broken heart suffered in the 1960s, when he was rejected for another man by a younger woman who became a famous artist, only to die of cancer at age 28. Still, it is clear that Daniel has a genuine connection with Elisabeth, so much so that when Daniel is dying, during periods when he is not sleeping, all he can ask for is Elisabeth. Elisabeth spends much of the novel therein visiting Daniel at his bedside, while Elisabeth reflects on and dreams of the past, and while Daniel drifts between Heaven and Earth and between the past and present in his mind.

Meanwhile, the divided population of the United Kingdom continues to argue with itself. A detention center for illegal immigrants is seemingly set up outside Elisabeth’s mother’s town, which draws the anger of her mother to the point where she attacks the fence that has been put up, leading her to being detained for an hour and vowing to be arrested again. Elisabeth’s mother also begins dating a woman, who applauds Elisabeth’s mother’s protests. Elisabeth’s mother and her girlfriend continue to be perplexed by Elisabeth’s devotion to Daniel –bElisabeth’s mother especially after her daughter has loved Daniel for decades. As the novel comes to a close, Daniel awakens from his sleep and asks for Elisabeth. She goes to him at once. As November winds down, there is a rose bush that still has roses on it.