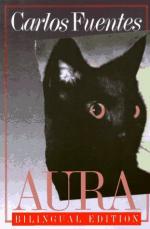 Carlos Fuentes
This Study Guide consists of approximately 30 pages of chapter summaries, quotes, character analysis, themes, and more - everything you need to sharpen your knowledge of Aura.

This detailed literature summary also contains Topics for Discussion and a Free Quiz on Aura by Carlos Fuentes.

Felipe Montero stumbles upon an advertisement for a high-paying job for a French-speaking historian. He fits the description perfectly and goes to the address listed the next day. After knocking on the door and receiving no response, he walks in. The interior is completely dark but a woman's voice rings out, asking him to come upstairs. Senora Consuelo, the woman who posted the advertisement, is eager to offer him the job. She wants someone to complete her dead husband's memoirs. Without saying why, the job requires that he stay in the house. After he has accepted the job, he meets Aura, Consuelo's young, beautiful niece, and is struck by her gorgeous green eyes.

Aura shows Felipe to his room, an upstairs loft with a glass, skylight ceiling. After inspecting his room, which appears to have not have been renovated for decades, he goes downstairs and finds Aura. They hear the loud yowling of cats. Aura explains there are a lot of rats in the area. They continue into the dining room where four places have been set. Two are for them, one is for Senora Consuelo—who is not feeling well—and the other is presumably in memory of Consuelo's dead husband. While they eat, Felipe tells Aura that he left some papers in his desk. She asks, suspiciously, if he wants to leave and, sensing her tone, he tells her the servant can retrieve them at his leisure and hands her the key.

He goes up to Senora Consuelo's room to retrieve materials so he can begin his work. He finds her knelt in prayer before a wall of religious icons. The icons follow a disturbing theme: Instead of portraying religious joy or hope, they are wrathful and gloomy. He notes that the only happy faces are those of the demons. As he watches, Consuelo becomes so excited by her prayer that she falls over and he helps her up to her bed. She gives him the key to a trunk in the corner of her room. Inside are her husband's manuscripts. He takes the first stack and returns to his room.

He reads the papers for awhile but eventually falls asleep. Daylight floods his room at sunrise, rousing him from his sleep. As he prepares for the day, he once again hears a terrible yowling. He finally locates its source: A group of cats are tied together, burning alive, in a tree outside of his window. He puts the image out of his mind, thinking that perhaps he only imagined it, and goes to breakfast. This time, both Aura and Consuelo are present. He notes something strange about Aura's behavior: Her every action directly corresponds to Consuelo's action. She sits silently and without emotion while she listens to her aunt's litany of complaints. They finally get up and leave together. Troubled by Aura's behavior, he tries to understand what is going on. Perhaps, he thinks, she is being kept here as a kind of prisoner to her aunt's will.

He decides not to confront her about it, at least not yet, and returns to his room. His sleep that night is troubled by vicious nightmares. He wakes up and finds Aura, naked, laying on top of him and kissing him. Without exchanging any words, they make love. Afterwards, she says he is her husband and he agrees. She leaves, telling him to come by her room at night. He goes to Consuelo's room and retrieves the second batch of manuscripts. As he leaves, he curses himself for not confronting her. He opens her door again and sees her dancing with her husband's old uniform. He closes the door and returns to his room. He looks through the manuscripts and discovers more about Consuelo. When she married her husband, she was fifteen and he was forty-seven. He recalls her green eyes and that she, like Aura, always dressed in a green dress.

Later in the day, he wakes up and goes to find Aura. She is in the kitchen beheading a goat with no expression on her face. He goes up stairs and finds Consuelo, moving her hands in the exact same motions in the air. Terrified, he runs and locks himself in his room. When he wakes up, he slowly realizes that he is moving with the same kind of mechanical rigidity that characterized Aura's movement. He goes to Aura's room for their arranged rendezvous. After she washes his feet—all the while looking at the black crucifix on her wall—they waltz around the room, in the same manner Senora Consuelo waltzed with the empty uniform of her dead husband. After performing a perverted variation of the Eucharist, they have sex. He wakes up the next day and discovers that Senora Consuelo had been sitting in the room and watching them make love.

He wakes up and and feels a strange presence in the room, even though Aura and Consuelo have both left. The presence follows him throughout the morning and oppresses his thought. It finally drives him to return to Senora Consuelo's room. He opens the chest and takes the last bundle of manuscripts and a collection of photographs. He realizes when looking at the photograph that Consuelo looked exactly like Aura when she was younger and is even more terrified when he realizes he looks exactly like Consuelo's dead husband. He falls asleep and wakes up after an indeterminate amount of time. He stumbles into Consuelo's room and makes love to Aura, who has turned into an old, decrepit woman.

More summaries and resources for teaching or studying Aura.