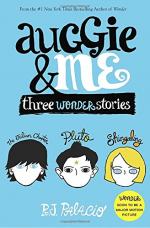 Plot Summary
+Chapters Summary and Analysis
"The Julian Chapter": "Ordinary" - "Evidence"
"The Julian Chapter": "The Verdict" - "New York"
“Pluto”: “Introductions” - “5:48 p.m.”
“Pluto”: “The Hospital Visit” - “11:59 p.m.”
"Shingaling": "How I Walked to School" - "How February Made Us Money, Too!"
"Shingaling": "How Ximena Made a Discovery" - "How I Finally Introduced Myself"
Free Quiz
Characters
Symbols and Symbolism
Settings
Themes and Motifs
Styles
Quotes
Order our Auggie & Me: Three Wonder Stories Study Guide

Palacio, R. J.
This Study Guide consists of approximately 61 pages of chapter summaries, quotes, character analysis, themes, and more - everything you need to sharpen your knowledge of Auggie & Me.

Beecher Prep is a setting in “The Julian Chapter” and “Shingaling.” These two stories focus on students in their fifth-grade year at this school. So, a good deal of the action takes place at the school.

Dannevilliers is a setting in “The Julian Chapter.” Dannevilliers was a poor village into which the sewer from larger cities emptied. When the Nazis come for the Jewish students in Grandmère’s school, Tourteau leads her to the safety of Dannevilliers through the sewers. Tourteau’s family hides her in their barn for two years. Grandmère takes Julian and his family to this village to see the barn in which she hid from the Nazis.

The hospital is a setting in “Pluto.” Chris is hesitant when his father tells him they are going to the hospital to pick up his mother, who broke her leg in a...

More summaries and resources for teaching or studying Auggie & Me: Three Wonder Stories.