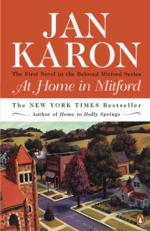 At Home in Mitford Summary & Study Guide includes comprehensive information and analysis to help you understand the book. This study guide contains the following sections:

This detailed literature summary also contains Related Titles and a Free Quiz on At Home in Mitford by Jan Karon.

At Home in Mitford by Jan Karon, is a delightful novel that details the life of Father Tim, the rector of Lord's Chapel in Mitford, North Carolina. Father Tim questions his calling and his ability to lead the parishioners at Lord's Chapel. The town of Mitford and the characters that live there enhance the priest's life throughout the year, bring him great joy and happiness.

At Home in Mitford by Jan Karon is the story of Father Tim and the eclectic group of people that make up the town of Mitford, North Carolina. Tim is at a crossroads in his life, unsure if he is able to continue as rector of Lord's Chapel. His bishop requests that he continue for a time, make some changes in his life, and see if he still feels the same way. Tim agrees, somewhat reluctantly, but does as the bishop requests. Tim lives a busy life in Mitford, and while ministering to his parishioners, Tim sometimes neglects himself. Feeling tired and run down, Tim is badgered by his overbearing secretary to see his doctor and friend, who eventually diagnosis him with diabetes. Though at first Tim follows doctor's orders, he does slack off at times, usually putting others before himself.

Tim winds up the ward for Dooley, his caretaker's grandson, as well as a large dog, Barnabas. The three become a family unit and quickly come to rely on each other. The townspeople of Mitford accept Dooley into the fold happily and Tim's life becomes filled with being Dooley's guardian.

The townspeople fill Tim's life with excitement, joy and sometimes sorrow. Miss Sadie Baxter, the 86-year-old cornerstone of Lord's Chapel donates a painting of questionable origin to the church, and follows that gift with a five million dollar gift to the town. Tim is thrilled to work with Miss Sadie in the planning for the nursing home that she wants built in honor of her family and the love of her life, Willard Porter. Tim meets Olivia Davenport, a new woman in town, who informs him that she is dying, and would like to spend her final days making others happy. The two devise a plan for Olivia to read scripture to the ill at the hospital. Though Olivia is at first resigned to die, she meets Hoppy Harper, the town doctor and as her relationship with him grows, so does her will to fight for life.

Barnabas the scripture loving dog takes up residence with Father Tim as well. Though the dog is sometimes uncontrollable, Tim quickly discovers to his delight that Barnabas will sink to his haunches and listen intently when he hears scripture recited. The dog and the priest seem made to be together. The lovely Cynthia Coopersmith moves into the small house next door, adding another wrinkle to the rector's life. Tim enjoys Cynthia's company very much and is surprised by the feelings of jealousy he experiences when his neighbor spends time with another man. Though Tim is sure he likes Cynthia, for every step he makes forward in the relationship, Tim questions himself and pulls back frequently. Cynthia is patient and tries not to push the rector, but her simple joy in life can sometimes be as overwhelming as it is calming.

A jewel thief startles the townspeople when he descends from the attic of Lord's Chapel, solving the mystery of the missing food at the church. The man's story inspires the parishioners, as well as Tim, making him question his desire to leave his post. The entire town surrounds the man with love, and helps Tim realize that though the people of Mitford can be difficult at times, they are also wonderfully giving.

Events conspire in Tim's life that cause him to pay less attention to his health and well being. Olivia Davenport receives a heart transplant and is recovering out of town with Tim's doctor. Barnabas is dognapped, and though Tim is fond of the dog, he had no idea how much he had become a part of his life. When the dog is discovered with a group of drug dealers in the woods behind Mitford, a deputy is shot while trying to recover Barnabas and arrest the dealers. In the confusion over the following days, Tim becomes more tired and confused, as well as short tempered. The neglect of his health has continued for too long, and after eating cake dropped off by a parishioner, the rector slips into a diabetic coma. Cynthia finds him and Tim recovers; however, he is now insulin dependent.

The bishop, Stuart Cullen, has ordered Tim to take a vacation for two months and Tim realizes that he must do something in order to make the changes required in his life. Absalom Greer, the Baptist preacher, is recruited to take care of Tim's flock at Lord's Chapel. Tim makes arrangements to travel to Ireland with his cousin and speaks with Cynthia. Though he is very fond of her, the priest can not make a deeper commitment to her until he is sure of the commitment he has with God. As Tim's plane lifts off, he looks forward to the trip, putting his life in God's hands, willing to relinquish matters to Him, in order to return to Mitford a better priest and man.