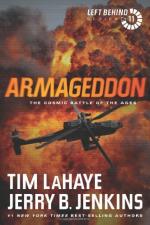 Armageddon: The Cosmic Battle of the Ages Summary & Study Guide

Tim LaHaye
This Study Guide consists of approximately 32 pages of chapter summaries, quotes, character analysis, themes, and more - everything you need to sharpen your knowledge of Armageddon.

Armageddon: The Cosmic Battle of the Ages Summary & Study Guide includes comprehensive information and analysis to help you understand the book. This study guide contains the following sections:

This detailed literature summary also contains Topics for Discussion on Armageddon: The Cosmic Battle of the Ages by Tim LaHaye.

Chloe Steel Williams, her husband Buck, and her father Rayford are among the group of believers who are part of the Tribulation Force, a group of people dedicated to bringing lost souls to God before the Glorious Appearing of Jesus Christ. Chloe and Buck are living in an underground bunker with dozens of other believers as the story opens. They are careful to watch for soldiers of the Global military force who are intent on torturing them to death because of their beliefs and their refusal to take the Mark of the Beast. Chloe discovers a military vehicle near the compound one night and goes to investigate. When she realizes that she's going to be captured, she pretends to be jogging and tries to lead the military to believe she lives farther away.

When Buck discovers that Chloe has been captured, he wants to invade the prison and break her out. However, he is convinced by other members of the Tribulation Force that it's a futile effort that will only result in more people being held. As the story progresses, Chloe knows that she's to be executed and prays only for the strength to endure the death in a way that will bring honor to Jesus. She also prays for strength for her father, husband, and four-year-old son, Kenny. Members of the Tribulation Force are prepared to interrupt the broadcast of Chloe's execution so that the world can't watch her final moment, but an Angel takes care of that, casting a light that's so bright that the cameras are unable to capture the moment.

Buck wants to throw himself into action as he seeks to deal with Chloe's death. They are all counting down the days to Jesus' second coming - known as the Glorious Appearing. Many hope only to survive to see that moment while others hope to begin their lives in the thousand-year reign of Jesus. Buck is assigned a trip to Jerusalem to serve as a body guard for Tsion, a revered teacher who believes he is to be there to reach as many Jews as possible in the hours before the Glorious Appearing. Buck is there when Carpatia - the Anti-Christ - attacks the city. Hundreds are slaughtered in the attack including Tsion and Buck.

Meanwhile, Rayford remains at Petra, a city divinely protected by God, when Carpathia's troops attack. Rayford is acknowledged as the leader, although he depends on others to decide military tactics and handle technology centers. The technology geniuses have managed to tap into communications systems and have watched as Carpathia reveals his plans to attack Jerusalem and Petra. Rayford is piloting a helicopter when the invaders fire directly at him. He doesn't have time to dodge but the projectile passes through him and strikes the enemy forces. Back on the ground, Rayford is headed to provide backup for another group of Petra's defenders when the bombs begin to fall outside the city. He's thrown from his ATV and pleads with God to hasten the second coming as he dies.

More summaries and resources for teaching or studying Armageddon: The Cosmic Battle of the Ages.

Armageddon: The Cosmic Battle of the Ages from BookRags. (c)2022 BookRags, Inc. All rights reserved.