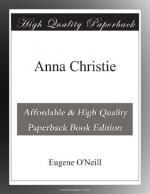 Eugene O'Neill
This Study Guide consists of approximately 52 pages of chapter summaries, quotes, character analysis, themes, and more - everything you need to sharpen your knowledge of Anna Christie.

Anna Christie went through several revisions before its Broadway debut at the Vanderbilt Theatre on November 2, 1921. O'Neill's first version was a four-act play entitled Chris, which opened in Atlantic City, New Jersey on March 8, 1920. Anna's father dominated this play, and Anna and Mat were minor roles. O'Neill called his second version The Ole Davil, which provided the outline for the final version. O'Neill's last revisions strengthened the character of Anna and reworked the plot to focus on her. The success of Anna Christie helped reinforce O'Neill's reputation as one of the finest American dramatists.

The play focuses on the problematic relationship between a sailor and the daughter he has not seen for almost twenty years. Their relationship becomes complicated by her romantic involvement with another man of the sea and her unveiling of her troubled past. In this compelling account of a young woman's decline and subsequent salvation, O'Neill presents a realistic and painful exploration of family conflict and the harsh reality of women's lives in the early part of the twentieth century. Yet, audiences and critics also praised the play's confirmation of the power of love and forgiveness. Frederic I. Carpenter, in his study of O'Neill's plays, comments that Anna Christie is "a serious study of modern life, which dramatizes that mixture of comedy and tragedy most characteristic of life."

Anna Christie was successfully adapted to the screen three times. The second version starred Greta Garbo and is considered by film critics to be one of Hollywood's finest motion pictures.

More summaries and resources for teaching or studying Anna Christie.

Anna Christie from Gale. ©2005-2006 Thomson Gale, a part of the Thomson Corporation. All rights reserved.