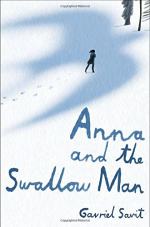 Related Topics
The Way Back

Gavriel Savit
This Study Guide consists of approximately 40 pages of chapter summaries, quotes, character analysis, themes, and more - everything you need to sharpen your knowledge of Anna and the Swallow Man.

A name is symbolic of identity. The Swallow Man never reveals his name, keeping his true identity hidden. He does so to stay safe, encouraging Anna never to use her own name as well. Anna is able to hide from her identity until the pharmacist trades her nudity for drugs and she can only think of herself as Anna.

The knife symbolizes survival. The Swallow Man slits the throat of the Peddler to protect his identity and keep Anna safe from a predator. He is able to justify the murder because of his circumstance. This demonstrates how the justification is on one side, while cold-blooded murder is on the other, illustrating a double edge. He later gives the knife to Anna as a means to protect herself, understanding that she will only use the knife if absolutely necessary.

The gloves that Anna gives the...

More summaries and resources for teaching or studying Anna and the Swallow Man.

Anna and the Swallow Man from BookRags. (c)2022 BookRags, Inc. All rights reserved.