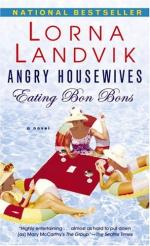 Angry Housewives Eating Bon Bons is a novel of friendship and secrets. The novel follows five friends over the course of thirty years, through the trials and tribulations of marriage, motherhood, and everyday life. Together these women guide each other through the darkness to find the light of love and friendship at the end of the road. Angry Housewives is a delightful view of the world women occupy that even the male reader will find fascinating.

Freesia Court is a middle class neighborhood in the middle of the frozen winter landscape of Minnesota. Faith, who grew up in the south, is left alone in this desolate place without a soul to turn to. So when Faith is invited to join a spontaneous snowball fight with a group of neighborhood women, she finds herself embracing behavior she never would have engaged in before. When the women become too cold to play any longer, Faith invites them to her house because she is reluctant for the night to end. A casual conversation about books leads to the idea of a book club.

The first few meetings of the book club are polite and intelligent affairs. However, as the women get to know one another and begin to share pieces of themselves, it becomes more relaxed, a time the woman soon come to enjoy. Faith feels a part of something special for the first time in her life. However, Faith has a deep, dark secret that threatens to ruin her newfound friendships. Faith is not the only one with a secret. Merit too is hiding something. Merit's husband beats her on a regular basis, though he is careful not to mark her face so his cruelty remains hidden. Kari, too has a secret. Kari's beautiful adopted daughter is really her great niece. This secret weighs heavy on Kari, making it impossible for her to enjoy family gatherings.

Slip, an activist, struggles through the years with the burden of her beliefs. Slip wants to change the world, but finds she cannot even help her own brother. Slip's brother enlisted in the military and was sent to Vietnam where he was wounded. Slip's brother comes home a broken man, in spirit as much as in his physical being. Slip watches the deterioration of her brother and feels helpless to do anything for him, finally learning there are some things she cannot control.

This lesson is underscored for Slip when she learns Faith has been lying to her for their entire friendship. Faith finally confesses to her friends her father was not a doctor, her mother not a pampered housewife. Faith tells the truth, that her mother was an alcoholic who died in a car crash Faith feels she caused. Although this confession frees Faith, Slip is left feeling as though she cannot trust anyone around her, especially the people she once thought she could count on for everything. It is Slip's son who teaches her that her life has been perfect thus far and she should try to put herself in Faith's shoes in order to see it from her point of view. Slip is able to do this and finally forgives her good friend.

Soon all the secrets of the Angry Housewives have come out. Merit leaves her husband with the help of the housewives and finds true love with another. Kari tells her daughter about her birth mother and nearly loses her daughter, but is soon rewarded with forgiveness and understanding. Everything has come full circle for the Angry Housewives. This is the golden time in their lives, the time when they should be able to sit back and enjoy the fruits of their labors. However, Slip learns she has cancer shortly after her daughter publishes her first novel. Slip will not let go, however, will not go quietly into the night and the housewives stand beside her, fighting for her.