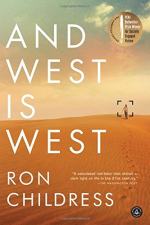 And West Is West Summary & Study Guide includes comprehensive information and analysis to help you understand the book. This study guide contains the following sections:

This detailed literature summary also contains Quotes and a Free Quiz on And West Is West by Ron Childress.

NOTE: All citations in this Study Guide refer to the Kindle version of And West is West, published October, 2015.

Although Ethan Winters and Jessica Aldridge work in two separate fields, both learn that even in today’s world of computer technology and one's ability to manipulate forces thousands of miles away, a human being still has a conscience that makes the person feel responsible for immoral acts. The novel describes how Ethan and Jessica use their experiences to make themselves better people. Ethan chooses to teach school over his high paying computer coding job in which he made money off acts of terrorism. Jessica gets a job as a drone operator on the Mexican border where she carefully considers those whom she calls to be intercepted by border patrol.

Jessica is working as a drone pilot in the United States Air Force when she is called to fire upon a convoy believed to be carrying al-Yarisi, a dangerous terrorist. AlthoughVoigt, Jessica's commander, gets the command from his higher-ups to fire the missile, Jessica hesitates because she sees two girls dressed in burkas get out of one of the SUVs. Regardless, her superior officers order her to fire, and she follows their commands.

To deal with her stress, Jessica writes letters to her father who is incarcerated for murder. In her letters, she includes details about her work and information about the two innocent girls who were killed. Jessica is dismissed from her position with the Air Force for divulging the information to her father. She is shocked by her dismissal. While in the hospital suffering with dehydration and sunburn after a hike in the desert, Jessica becomes more disturbed when she gets a visit from Homeland Security She senses the group wants to have her put in a psychiatric hospital to keep her from telling any information about the downfalls of the drone program. After it is learned that al-Yarisi was not killed in the drone strike, two FBI agents are tasked with arresting Jessica. Jessica chooses to turn herself in before the agents find her.

Meanwhile, Ethan is making a lot of money by writing computer programs for a bank. One of the programs allowed the bank to make money by trading forms of currency when it was most profitable. Ethan’s world falls apart when he is accused of making a mistake in his programing that causes his bank to lose a good deal of money. Due to the error, Ethan loses his job and he is danger of losing his accumulated wealth. Ethan fights the decision, believing that his program was sabotaged.

As Ethan is fighting is job battles, his ex-girlfriend, Zoe, is in the middle of a crisis. Against his will, Ethan becomes entangled in her situation. Zoe's father is suffering from pancreatic cancer, and her mother has dementia. Before Zoe’s father kills his wife and commits suicide, he gives Ethan a package of information about Zoe’s real identity. There is information in the package that tells Zoe the people she always thought were her parents were actually her grandparents. Her mother, whom she had never known, was killed in a car wreck when Zoe was an infant. Zoe is devastated by the news about her true identity. To make matters worse, Zoe tries to start a new life with a new job in Washington, but she is quickly disenchanted with the job and loses faith in her ability to change the world for the better. While house sitting for a friend in New York, Zoe takes an overdose of medication and alcohol. She drowns in the tub. It is never determined if her death is accidental or intentional.

Already off balance from losing his job, Ethan takes Zoe’s death hard. He believes he should have done more to help her and wonders if she was the one intended for him. Then, Ethan learns from the detective who investigated Zoe’s death that her father, Don Aldridge, is alive but in jail in Florida. Ethan decides to visit Zoe’s father.

It is while Ethan is in Florida that his and Jessica’s paths cross. Ethan learns from Don that Zoe had a half-sister. Don asks Ethan to look for Jessica and tell him if she is okay. Because the FBI is monitoring all of Don’s communication, the agents looking for Jessica arrest Ethan because they believe he can lead them to Jessica. He is later released when the agents get the information they wanted from another source but the experience initiates a desire in Ethan to protect Jessica. He goes so far as to offer to hire a private detective to help Don locate her. Don turns down the offer because he gets a postcard from Tucson, which he believes is from Jessica.

Despite the trials in their lives Ethan and Jessica use their experiences to make themselves better people. Ethan decides to become a schoolteacher instead of accepting a lucrative job offer where he would be using computer coding to make money off tragedy. Zoe gets a job with Defense of America flying a drone to patrol the Mexican border. She keeps in mind the two girls who were killed during the missile strike that she initiated and performs her job with sympathy.