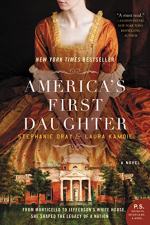 America’s First Daughter is a historical novel by Stephanie Dray and Laura Kamoie. The story recounts most of the life of Martha “Patsy” Jefferson, daughter of Thomas Jefferson. The novel begins one day after Thomas Jefferson has died in 1826, as Patsy begins the long task of sifting through her father’s letters and papers to prepare them for publishing. She is destroying any letters that could be considered damaging to his stature and reputation. It is work Patsy has always done because her life's mission is to protect her father.

The novel then reverts back in time. It is 1781, and Thomas Jefferson is the governor of Virginia. The Revolutionary War is raging. As a child, Patsy is living with her father, her mother (Martha), and her sister (Polly) at Monticello, Jefferson’s mountaintop estate. British troops are attempting to seize Jefferson. So, the family must flee. They are accompanied and guarded by a distant relative, twenty-two year-old William Short, who also serves in the Virginia Legislature. Not long after the event, Patsy’s mother dies. Before she dies, she makes Patsy promise to always watch over and protect her father and family. Patsy readily agrees to this.

When the American government selects Thomas Jefferson to serve as diplomat to France, Jefferson takes on William Short as both protégé and secretary. In Paris, Patsy comes of age as a teenager, witnesses the French Revolution, and falls in love with William. William proposes marriage to her, but Patsy turns him down in order to return to Virginia with her father. She is intent on fulfilling her duty of protecting her father. Duty and loyalty to family come above all else to Patsy.

In Virginia, Tom Randolph, a wealthy young man who is passionate, impetuous, and prone to moodiness, marries Patsy instead. Tom, who is shunned and treated cruelly by his own father, comes to look at Thomas Jefferson as a surrogate father while. Randolph is determined to make his own way in life to prove himself as a man worthy of Patsy. As the years pass, Patsy watches as both Tom and her father expand their service in politics –with Tom becoming a congressman and Jefferson becoming President of the United States. Patsy struggles to protect the reputation of both her father and Tom from family scandal and political opposition. She shields the family name from those who would seize any chance to smear it. To accomplish this, Patsy does everything from lying in court to destroying letters referencing things like Jefferson’s romantic relationship with his slave, Sally Hemings. Patsy is troubled that she must do immoral things against God to protect her husband and especially her father. However, she remembers the promise she made to her mother so many years before.

As the years pass, Patsy bears Tom twelve children. Polly, Patsy's sister, dies of complications after having a few children of her own. Tom, who is never able to get ahead because he cannot measure up to his own expectations, becomes an abusive and violent drunk toward Patsy. Eventually, Patsy and Tom become estranged because of Tom's behavior. Jefferson steps in to protect Patsy and all of his grandchildren, even as financial troubles mean Monticello must be sold soon. The family is secretly propped up from money given to Jefferson by William Short, who has since had a successful diplomatic career and become vastly wealthy in investments. Patsy’s own daughter, Ann, is in an abusive marriage which results in her death.

Just before Tom dies, Patsy and her children reconcile with him so that he can die in peace. Jefferson dies in 1826, and the novel returns to the present. Patsy finishes gathering her father’s items for a book that is to published. The book will establish Jefferson's legacy. Monticello is boarded up to be sold. It is then that William Short reenters Patsy's life, and the two renew their romance from many years ago. Patsy goes on to serve as First Lady for the widowed President Andrew Jackson. Patsy sees her children living happy, successful lives.