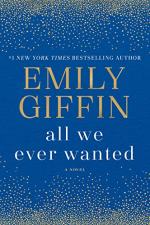 Related Topics
Something Blue
The One & Only

All We Ever Wanted Summary & Study Guide

Emily Giffin
This Study Guide consists of approximately 55 pages of chapter summaries, quotes, character analysis, themes, and more - everything you need to sharpen your knowledge of All We Ever Wanted.

All We Ever Wanted Summary & Study Guide Description

All We Ever Wanted Summary & Study Guide includes comprehensive information and analysis to help you understand the book. This study guide contains the following sections:

This detailed literature summary also contains Quotes and a Free Quiz on All We Ever Wanted by Emily Giffin.

The following version of the novel was used to create this study guide: Giffin, Emily. All We Ever Wanted. Ballantine Books, June 26, 2018. Kindle.

The novel, All We Ever Wanted by Emily Giffin, touches on current hot topics including race, sexual assault, and materialism in a way that gives the reader hope for the future. Even though Nina Browning seemed to have a perfect life — she had a beautiful home, a rich husband, and her son, Finch, was on his way to Princeton — she realized how far she had evolved from the person she wanted to be when her son was accused of taking a sexually and racially explicit picture of a girl from his school. A victim of sexual abuse herself, Nina could not believe what her son had done. She came to realize that she had to take charge of her life both for her sake and her son’s.

Lyla Volpe thought she had gotten lucky when Finch Browning, the boy on whom she had a crush, invited her to a party. The day after the party, Lyla woke to the news that Finch had taken a picture of her when she had passed out drunk. One breast and nipple were exposed in the photo and Lyla was holding a green Uno card. The caption: “Looks like she got her green card” (25) accompanied the photo.

Because the photo of Lyla was a violation of Windsor Academy’s code of honor, the headmaster of the school, Walter Quarterman, scheduled a hearing for Finch with the school’s honor council. Because Kirk, Finch’s father, feared that Finch’s chances to attend Princeton would be destroyed if Finch was found guilty Kirk decided to bribe Lyla’s father, Tom, into choosing not to pursue the issue.

Nina believed that her husband handled the situation badly so she scheduled a private meeting with Tom. Later, Nina and Finch visited Lyla and Tom so that Finch could apologize to Lyla in person. In private, Finch claimed to Lyla that his ex-girlfriend, Polly, had taken the picture of Lyla and had distributed it because she was jealous. Lyla told Finch he should tell the school that Polly was responsible for the picture, but he said he would not because he wanted to protect Polly.

Without Tom’s permission, Lyla began seeing Finch. Finch arranged for his father to get them expensive ticket to a concert even though Nina had told Finch he was not allowed to go. The next day, Finch invited Lyla to his house where they had sex. Polly showed up at Finch’s house and caught him with Lyla. Polly and Finch argued with one another and Polly accused Lyla of being a slut. When Lyla woke up the next morning, someone had spray painted the word slut on her front porch. Tom reported to Walter the new development. While the two men were meeting, Finch disrupted the meeting to tell them that Polly was responsible for the photo and vandalism. He claimed he had decided that Polly was not worth protecting any longer.

Polly contacted Lyla by text to tell her that Finch had other photos of Lyla that were worse than the one that she had seen. Polly also told Lyla that Finch had videos on his phone of Finch and Polly having sex. He had claimed he had deleted those videos. When Lyla told Polly she had to tell her parents about the videos, Polly said that she could not tell her parents what happened. She said she wanted to disappear. Fearing that Polly was going to try to hurt herself Lyla got Nina to take her to Polly’s house. They contacted Polly’s parents in time to save Polly’s life.

Finch was not punished for taking the photo of Lyla because the honor council could not find enough evidence against him. Nina decided to divorce Kirk when she discovered that he was such a bad influence on their son. Finch stayed with his father for some time but eventually returned to his mother and tried to change his ways. Nina and Tom went into a charity business together building tree houses for women and children housed in shelters for the abused.

More summaries and resources for teaching or studying All We Ever Wanted.

All We Ever Wanted from BookRags. (c)2022 BookRags, Inc. All rights reserved.