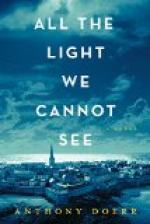 All the Light We Cannot See Summary & Study Guide

Anthony Doerr
This Study Guide consists of approximately 69 pages of chapter summaries, quotes, character analysis, themes, and more - everything you need to sharpen your knowledge of All the Light We Cannot See.

All the Light We Cannot See Summary & Study Guide Description

All the Light We Cannot See Summary & Study Guide includes comprehensive information and analysis to help you understand the book. This study guide contains the following sections:

This detailed literature summary also contains Quotes and a Free Quiz on All the Light We Cannot See by Anthony Doerr.

Marie-Laure LeBlanc and her father Daniel live in Paris where he is a locksmith who keeps track of thousands of locks and keys for the National Museum of Natural History. When Marie-Laure loses her sight at the age of six, her father builds her a model of the area they live in, complete with every manhole cover, building, street and lane represented. The intricate model allows Marie-Laure to memorize the area and confidently navigate it without fear. A remarkably talented woodworker, he also creates puzzles for her each year on her birthday that involve up to a dozen or more moves to solve, and she manages to do so in minutes each time to his amazement.

As war nears, the museum curators are forced to pack up the valuable pieces and move them to safety. One such item is a precious stone that is kept safely behind a number of doors, and never shown on display. Called the Sea of Flames, the large blue diamond has a red occlusion at its center, and a storied past. The stone is said to have the power to keep its owner safe while bringing ruin and death to all around them. Each time it has changed hands, its providence has repeated itself. Before moving it, Daniel is asked to create three likenesses of the stone, and then each of the four stones are given to four trusted couriers, neither one knowing whether the one they have is the real one or not in the hopes that it can be moved safely.

Daniel is given one of the stones just before he and Marie-Laure leave Paris for Saint-Malo. With war closing in on them, the trip is a perilous one, and much of it is made on foot. Marie-Laure is afraid to leave her home and the security of the area she knows, but believes that her father will keep her safe, and holds on to his promise that he will never leave her. Great uncle Etienne and Madame Manec welcome them when they arrive and give them shelter and food. Daniel keeps the stone safe and begins to build another model for Marie-Laure, promising her that when it is safe he will take her outside.

Werner Pfennig and his sister Jutta are orphans who live in Children's House in Zollverein, Germany. Werner teaches himself the basics of electronics, inspired by a radio program hosted by a Frenchman. Soon he is building radios of his own, and increasing their range and power instead of just repairing them. When word of his prowess gets out, he is invited to audition to attend the National Political Institutes of Education. He is admitted, but is miserable and longs to return to his sister and the only home he knows. Instead, he is educated and singled out for his electronic ability, asked to create a transceiver that would enable them to locate illegal radio transmissions. When he manages to do so, he is fast tracked into a uniform and sent out to hunt and destroy any they can find.

Marie-Laure's father is arrested and sent to a work camp, but the stone remains hidden in the model of Etienne's house where Marie-Laure eventually discovers it. Another man is searching for the fabled Sea of Flames, and manages to locate three out of the four stones that left the museum. Unfortunately, they were all fakes, but Sergeant Major Reinhold von Rumpel is motivated to find this particular prize. Von Rumpel is dying, cancer spreading through his body, and he hopes that the stone has the power to keep him alive. Etienne is detained and Marie-Laure is home alone when von Rumpel comes, still hunting his stone. She hides in the attic with the radio and transmitter Etienne built and used to relay messages for the resistance. He spends days in the house hunting while Marie-Laure hides until Werner arrives, having heard her broadcast in Etienne's place, and saves her from von Rumpel redeeming himself just a little as he keeps her identity safe and helps her to escape after learning that it was her uncle who had inspired him as a child with his broadcasts.

Two children on opposite sides of the war find each other in the middle, and remember each other for a lifetime. Doerr brings these children to life in a time when peace seems impossible, and survival unlikely.

More summaries and resources for teaching or studying All the Light We Cannot See.

All the Light We Cannot See from BookRags. (c)2022 BookRags, Inc. All rights reserved.