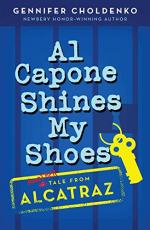 Gennifer Choldenko
This Study Guide consists of approximately 34 pages of chapter summaries, quotes, character analysis, themes, and more - everything you need to sharpen your knowledge of Al Capone Shines My Shoes.

This detailed literature summary also contains Quotes and a Free Quiz on Al Capone Shines My Shoes by Gennifer Choldenko.

The following version of this book was used to create this study guide: Choldenko, Gennifer. Al Capone Shines My Shoes. Puffin Books, 2009.

Al Capone Shines My Shoes is a young adult historical novel in the Tales From Alcatraz series by Gennifer Choldenko which recounts the adventures of 12-year-old Moose Flanagan during an escape attempt on Alcatraz Island. In the 1930s, many families often lived on Alcatraz along with the men in their families who worked as prison guards. Among them are Moose, his mentally disabled sister, Natalie, and their parents (their father being a prison guard). Also present are Moose’s friends Jimmy (an intelligent kid who has more interest in things like flies than baseball), Theresa (Jimmy’s younger sister), Piper (the gorgeous but often mean-spirited daughter of the warden), Annie (a plain but athletic girl), and others. The kids go to school over in San Francisco on the mainland, and get by as best they can on Alcatraz. Moose’s buddy, Scout, who lives in the city, often visits the island to play baseball with Moose and the other kids. They do their best to stay out of the way of strict prison guard Darby Trixle while hoping for a glimpse of notorious gangster, Al Capone.

By writing a note to Al Capone asking for his help in getting Natalie into the Marinoff school on the mainland, Moose becomes the unwitting recipient of a favor-owed to Capone. Annie is horrified by this, thinking it will be for the worst. Instead, Capone tasks Moose with buying yellow roses for his wife, Mae Capone, which Moose does. When Moose saves the life of Jimmy’s baby brother, Moose’s dad brings him into the prison to meet Al Capone. Moose’s dad warns Jimmy that being respectful to a prisoner like Al Capone is one thing, but trusting him is another. At the same time, despite her often cruel ways, it is learned that Piper and Annie both have a crush on Moose. After an argument with Moose, Piper tells her father that Moose’s dad and Jimmy’s dad were drinking before going on guard tower duty. This angers Moose.

When Natalie comes home for a visit, things take an unexpected turn. In her suitcase is a bar-spreader, a tool for breaking out of prison. Moose and his friends are stunned, as Natalie seems to have no real idea what they are for. Clearly, a breakout attempt is in the works somewhere, somehow. Moose also comes to learn why Piper has been so mean and has lashed out at him and Jimmy: her own mother is pregnant, but also very ill. Fortunately, Piper’s mother pulls through, and she apologizes to those she has wronged, including Jimmy’s father. When Piper’s new baby brother comes home from the hospital, the breakout attempt occurs as the warden and most of his men are celebrating the birth. Three convicts, including Willy One Arm (who has a pet mouse named Molly), Buddy Boy, and Seven Fingers (the cellmate of Al Capone) takes Moose, his sister, and his friends as hostages. They take away Piper’s baby brother, but where they take him is unknown.

As the convicts herd Moose and the others down to the docks, Jimmy releases the flies he has been breeding to help cause a distraction while the guards are alerted and rush to save the day. The convicts are recaptured. The search begins for Piper’s missing baby brother. It is Natalie who finds the baby. She ends up following Molly back to the cells with the baby in her arms. Capone takes the baby through the cells and cares for the baby until Moose and the others find him. Capone gently surrenders the baby, explaining he did not participate in the escape attempt since he is due to be released in a few years and longs to see his own son. It is learned that a former convict attempted to use Natalie to smuggle the bar-spreader to Alcatraz, but the convict is now long gone. Life returns to as normal as possible on Alcatraz thereafter, with Natalie returning to school and Moose carrying on.

More summaries and resources for teaching or studying Al Capone Shines My Shoes.