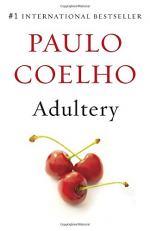 Coelho, Paulo
This Study Guide consists of approximately 51 pages of chapter summaries, quotes, character analysis, themes, and more - everything you need to sharpen your knowledge of Adultery.

This detailed literature summary also contains Quotes and a Free Quiz on Adultery by Coelho, Paulo .

The narrative, told in the first-person perspective of Linda, begins with Linda telling readers how unfulfilled she is by her current existence even though, by society’s standards, she has the perfect life. She has a loving and rich husband, two adorable children, and is a journalist at a well-respected Swiss newspaper. Still, she feels that she needs a change. One day, she has lunch with a friend who suffers from depression. Her friend takes her to a visually unappealing Japanese restaurant with excellent food. Linda talks to her friend about her depression and discovers that she is taking medication and feels fine now. The conversation leads Linda to believe that she is moving towards the apathy stage of depression.

Soon afterwards, her boss sends Linda to interview a promising politician named Jacob who also happens to be an ex-boyfriend from her school days. She meets him in his office, interviews him, and is about to leave when he locks the door and kisses her. She gives him oral sex. At first, she has mixed feelings about her actions, but then she realizes that she feels better because she has taken two risks – eating at a different restaurant and spontaneously giving Jacob oral sex in his office. She likes the feeling and from that point on becomes obsessed with getting Jacob as she thinks that he is the man she loves. Her endeavors include trying to dissolve his marriage by attempting to frame his wife so that she goes to jail and using a telephone number that is not hers to contact him and tell him that they have to meet because someone saw them together and is blackmailing her.

Linda finally gets him to meet her to have sex, but it is not at all as she expected as it is unconventional and lacks romance. She decides that she likes what the sexual encounters with Jacob have awakened in her, but during the period she tries to make Jacob hers, she realizes that she needs mental help as well. To get it, she talks to her husband about her feelings. He is understanding and tries to help. She talks to psychiatrists who tell her that her behavior is not as strange as she thinks it is and want to schedule appointments for treatment. Finally, she goes to see a shaman, pretending that she is writing an article, but confesses that she is also there to find answers for herself. She feels as if he understands her, and she follows his advice to see her actions through as she will know when what she is doing is wrong.

One evening, both she and Jacob, along with their spouses, attend the same reception. Marianne, Jacob’s wife, invites Linda and her husband to dinner and they accept. During the dinner, Linda feels as if Marianne is provoking her and through her comments, she reveals her affair with Jacob. Afterwards, Jacob tells her that Marianne had not known about their relationship before then.

Later, Linda decides that she needs to tell her husband about her relationship with Jacob, but he does all of the talking and shows that he loves her and does not want to live without her unless she wants to leave. The conversation makes her realize that she is special because a man like her husband loves her. Her husband suggests that they go back to the place where they have first declared their love for each other, Interlaken. Before they do, Linda brings closure to her relationship with Jacob by going to his office and having sex with him, but this time, she is the one giving the orders.

When Linda and her husband go to Interlaken, her husband realizes that they cannot go back in time, gets drunk, and expresses his regrets. The next day he wants to leave, but Linda is happy that he has shown her his weakness. Before they leave, they spontaneously decide to go paragliding and, up in the air, Linda has a revelation regarding what love is. She now feels self-fulfilled and is closer to her husband and children than ever before.

More summaries and resources for teaching or studying Adultery.