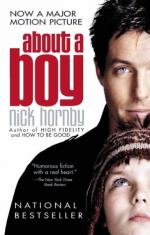 About a Boy Summary & Study Guide

About a Boy Summary & Study Guide includes comprehensive information and analysis to help you understand the book. This study guide contains the following sections:

This detailed literature summary also contains Topics for Discussion and a Free Quiz on About a Boy by Nick Hornby.

About A Boy by Nick Hornby is a novel of coming of age at middle age. Will Freeman is a thirty-six year old man who lives off the royalties of a song that his father wrote nearly seventy years ago. Will is commitment-phobic, so when he meets a single mother and discovers that this type of woman is just as reluctant to commit as he, he makes up a two-year old son so he can join a single parents group. Through this group Will meets twelve year old Marcus, a child who is completely opposite of Will. Marcus pushes himself on Will, hoping at first that Will might marry his mother, but later realizing that Will has all the knowledge Marcus needs to help him survive middle school. Together, Will and Marcus will struggle through everyday life and somehow help one another mature.

Marcus's mother has been depressed since moving to London and breaking up with her latest beau. At the same time, Marcus finds himself a target for all the bullies at his new school. Marcus attempts to get sympathy from his mother, but she is so focused on her own depression that she does not see how desperate Marcus truly is. At the same time, Will Freeman, who is commitment phobic, has recently discovered that despite his dislike of all children, dating single women can be beneficial to both him and them. Will has dated a single mother who is so jaded by the breakup of her marriage, that all she wanted from Will was a sexual relationship. This causes Will to decide that the only women he should date is single women. Will makes up a two year old son and joins a single parents support group.

After one meeting of SPAT, Single Parents, Alone Together, Will meet Suzie. Suzie is blond and beautiful. She is deeply angry at the man who left her for his secretary while she was still pregnant with their only child. Will manages to wrangle a date with Suzie, a picnic with the entire SPAT group. Unbeknownst to Will, this include Marcus, the son of Suzie's best friend. During the picnic, Will makes a halfhearted attempt to get to know Marcus, but Marcus has a dark sense of humor that Will cannot understand. However, when Marcus accidentally kills a duck by throwing a loaf of bread at its head, Will wins some respect on Marcus' part by lying to the wildlife officer about Marcus' intentions in throwing the bread.

Will and Suzie take Marcus home. When they arrive, they find Marcus' mother passed out on the couch from a drug overdose. Will accompanies the group to the hospital, unsure why he is there and unable to offer any consolation to Marcus. Over the next few days, Marcus finds himself dealing with the idea that his mother attempted suicide. Not only this, but tension at school has grown considerably worse. Marcus gets it into his head that his family needs to be increased by one more person so that he will not be alone should his mother succeed the next time she tries to commit suicide. To this end, Marcus decides his mother should marry Will.

Will offers to take Marcus out one afternoon to help him through the stress at home. Marcus insists that Will include his mother in the day out. However, Will and Marcus' mother have little to say to one another. However, Marcus is determined to continue bringing them together. To do this, Marcus invites himself into Will's home, blackmailing him with the fact that there is no two-year-old son. Will allows Marcus into his home and even buys him new shoes to help him fit in at school. When Marcus' mother learns of this, however, she jumps to the wrong conclusions and refuses to allow Will to see Marcus again.

Determined to have the right to think for himself, Marcus defies his mother and begins visiting Will regularly. Marcus has decided that Will will never marry his mother, but is determined to remain his friend anyway. At the same time, the truth has come out about Will and his scam to date single mothers seems to have died. However, on New Year's Eve, Will meets another single mother for whom he falls instantly in love. Afraid of this feeling at first, Will pursues this woman and eventually discovers that commitment is not such a bad thing. At the same time, Marcus becomes involved with Ellie, a rebellious girl from his school and learns a few lessons of life himself.

About a Boy from BookRags. (c)2022 BookRags, Inc. All rights reserved.