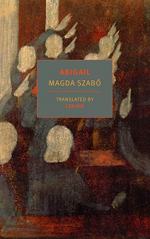 Magda Szabo
This Study Guide consists of approximately 62 pages of chapter summaries, quotes, character analysis, themes, and more - everything you need to sharpen your knowledge of Abigail.

This detailed literature summary also contains Quotes and a Free Quiz on Abigail by Magda Szabo.

The following version of this book was used to create the guide: Szabó, Magda. Abigail. Translated by Len Rix. New York Review Books, 1970 (translation 2020). [First published in the Hungarian language by Móra as Abigél, 1970.]

Szabó’s novel takes place over a period of seven months, beginning in the autumn of 1943 and ending in March 1944, shortly after the German occupation of Hungary. The novel follows the adventures of the 14-year-old protagonist, Georgina (Gina) Vitay, as she begins life at a fictional boarding school in rural Hungary.

The novel begins as Gina prepares to leave her home in Budapest for the Calvinist Bishop Matula Academy, in the provincial town of Árkod. Her father, the General, has arranged for Gina to transfer to her new school with no warning.

When Gina arrives at the Matula, she observes that the school resembles a fortress. The prefect, Sister Susanna, orients her to the school’s draconian rules. Gina meets two girls in her year, Mari Kis and Torma. Mari Kis and Torma introduce Gina to the informal traditions of the Matula, many of which are kept secret from the staff. One of these is a custom of marrying an item in the class inventory, which started with a former pupil named Mitsi Horn. Mari Kis and Torma also introduce Gina to a statue named Abigail, who is rumored to provide assistance to students in need. Gina scoffs at these naive rituals. She develops a crush on their class tutor, Péter Kalmár, and loathes their Latin teacher, Kőnig.

When Gina receives an empty aquarium for her “husband,” she insults her classmates and discloses the “marriage” ritual to Gedeon Torma, the director of the school. The director subjects Mari Kis and two other students to disciplinary action. Gina realizes the severity of her betrayal after the fifth-year class ostracizes her. Unable to express her loneliness and misery to her father, Gina decides to run away.

Gina attempts her escape during a tea party in Árkod, at the house of Mitsi Horn. On their way to Mitsi’s house, the students see anti-war slogans in a public square, the work of the “dissident of Árkod” (158). Gina escapes to the nearby rail station, where Kőnig catches her. When he lies to protect her, Gina’s disdain for him only deepens.

The General visits Gina at the Matula. He reveals that Hungary has lost the war against the Allied forces and that he is part of an underground anti-war resistance organization. He informs her that she can trust one other in Árkod, the dissident who has been spreading anti-war messages around the town. Gina promises that she will stay in the school until the General or the Árkod dissident give her permission to leave. As they part, both Gina and the General reflect on how her childhood has ended.

Back at the Matula, Gina and Mari Kis quarrel, and the class escalates their bullying of Gina. One evening, Gina finds a note from Abigail, which urges her to make peace with her classmates and consider turning to the statue for help. Later, air-raid sirens wake up the school, and the students hide in terror. Gina begs for her classmates’ forgiveness, and they reconcile.

Following their reconciliation, Gina grows close with her classmates. They learn details of her life in Budapest, including her suitor, Lieutenant Feri Kuncz. The class goes on an apple-picking excursion in the countryside. After observing an encounter among Kalmár, Susanna and Kőnig, the students speculate that Kalmár is in love with Susanna and fantasize about their marriage.

One day in Kőnig’s class, Gina convinces her classmates to play a prank to humiliate him. The Bishop and the director catch them in the act, but Kőnig pretends that the girls are only following his instructions. Gina receives a stern warning from Abigail.

In November, an unknown visitor breaks the aquarium in Gedeon Torma’s office. The General arrives at the school. He tells Gina that he will not be able to see her again for a while, and they say farewell.

Soon after, all of the Matula students and staff travel to Árkod for a special St. Nicholas’ Day service. A scandal ensues when the Matula girls accidentally sing an anti-war psalm, which Kalmár attributes to the Árkod dissident.

Shortly before Christmas, Gina notices that her classmate Bánki looks distraught. She writes to Abigail for help and receives a packet of baptismal certificates for Bánki and three other girls. The narrator implies that Bánki and the others were Jewish and that Abigail’s forged documents saved their lives.

Torma and Gina grow closer during the Christmas holiday, as they are the only students unable to return home. Gina overhears a painful exchange between Susanna and Kőnig. She learns that Kalmár has given Susanna an engagement ring, which Susanna mistakenly believes is from Kőnig. Kőnig rejects Susanna and claims to love Mitsi Horn instead, and Gina’s hostility toward him deepens. The students learn that Germany has occupied Hungary.

Lieutenant Feri Kuncz comes to Árkod and tells Gina that he needs to take Gina to see the General, who is ill. She believes him and learns that Bánki had written to him in the hopes of reconnecting him and Gina. Torma, Mari Kis and Bánki help Gina plan her escape from the school. Feri lies to Gina and claims that he is the Árkod dissident.

On what she believes will be her final day at the Matula, Gina finds herself appreciating the school and exhibiting exemplary behavior. She has an intimate moment with Torma in the infirmary, although they are interrupted. When Gina meets Feri at the gates of the school, Mráz, the glazier’s assistant, rings the alarm bell. Her plan foiled, Gina retreats to the dormitory, where she finds an ashtray that she had gifted to her father, as well as a note from Abigail. Abigail informs Gina that her father has already been arrested and that Feri was attempting to lure her out of the school in order to blackmail the General.

The next day, Feri appears at the Matula and attempts to take Gina away. However, Gedeon Torma resists Feri’s order. When Feri presses him, the director replies that he answers only to the Bishop and Christ himself.

On March 29, Mitsi Horn appears at the Matula without warning and treats the school to pastries and games. When Mitsi Horn dances with Gina, she whispers to her that the Matula will not be able to protect her anymore. She outlines an escape plan for Gina that evening. Gina asks Mitsi if she is Abigail. While Mitsi Horn distracts the rest of the school, Gina escapes to Susanna’s room, where she disguises herself with the prefect’s robe.

After a fraught journey to Mitsi Horn’s house, Mráz hands Gina identification papers for “Anna Makó.” Mitsi returns home and Susanna arrives, to everyone’s surprise. Susanna asks for Gina and her robe back, while Mitsi feigns ignorance. As an enraged Susanna turns to leave, Mitsi implies that there is nothing between her and Kőnig, who loves Susanna but is too shy to tell her. At that moment, Kőnig arrives, key in hand.

As the distraught Susanna attempts to leave, several soldiers arrive and demand to search the house. Susanna tells two lies to protect Kőnig and Gina. The soldiers leave. Gina watches as Susanna confronts Kőnig about his role as Abigail, but she is still convinced that they are speaking about Mitsi Horn. Kőnig obliquely confesses to Susanna that he loves her.

After saying goodbye to Susanna, Mráz and Kőnig, Gina tries to tell Mitsi Horn about her love of Abigail, but the older woman mocks her for her blindness. She informs Gina that Abigail is actually Kőnig. The novel ends with Gina renouncing her former identity and reflecting on how she could ever atone for failing to realize that Kőnig was Abigail all along.

More summaries and resources for teaching or studying Abigail.