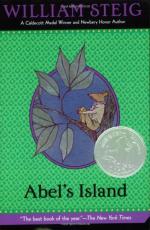 William Steig
This Study Guide consists of approximately 24 pages of chapter summaries, quotes, character analysis, themes, and more - everything you need to sharpen your knowledge of Abel's Island.

There is a great blizzard in January, so Abel stays buried deep inside the log. He does not know day from night because he sleeps most of the time. He goes into his little store room to eat and then goes back to sleep. Eventually the sun comes and there is an occasional thaw. Abel sees the light of the sun, which is beautiful to him. Everything looks marvelous. February comes, but Abel still puts on his snowshoes and goes to read the big book. Captain Burin, the bear character, has been wounded, which is a signal for Abel. Will he live through the winter? He decides he is going to live because spring will come.

It is only February though, and unfortunately, January was only a prelude to February. It becomes colder and the snowfall is heavier. Abel stays in the...

More summaries and resources for teaching or studying Abel's Island.