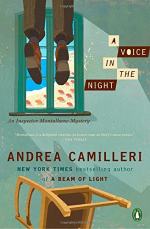 A Voice in the Night Summary & Study Guide

A Voice in the Night Summary & Study Guide Description

A Voice in the Night Summary & Study Guide includes comprehensive information and analysis to help you understand the book. This study guide contains the following sections:

This detailed literature summary also contains Quotes and a Free Quiz on A Voice in the Night by Andrea Camilleri.

This study guide was created using the following version of this book: Camilleri, Andrea. “A Voice in the Night.” Penguin Books. 2012.

Inspector Montalbano is feeling his age as the novel begins. He realizes it is his 58th birthday when he receives a phone call from Livia, his long-time love. Montalbano gets word of a burglary at a local supermarket used as a front for the Cuffaro family. He and Augello go and question Borsellino, the supermarket accountant. They both consider the possibility that Borsellino is guilty. Later they both return to the supermarket to investigate Borsellino’s apparent suicide.

Montalbano is not sure that Borsellino committed suicide, however. He speaks with the pathologist and continues his investigation, believing that Borsellino is actually a victim of foul play. As Montalbano tries to put the pieces together, he is visited by Giovanni Strangio, a man with whom Montalbano had an altercation at a gas station. Strangio is not concerned with what happened at the gas station and is, instead, at headquarters to report the brutal murder of his girlfriend Mariangela.

Montalbano, along with Fazio, go to investigate the crime scene and begin to suspect Strangio of the murder. When Montalbano learns that Mariangela was pregnant, he suspects that she was cheating on Strangio, leading him to kill her in a jealous rage. But Strangio denies any wrongdoing and gives the police an alibi. Montalbano works to find a weakness in the alibi.

While investigating Borsellino’s murder Montalbano uncovers a digital recorder. The local news pressures the police department, suggesting that Montalbano is responsible for sending Borsellino over the edge to commit suicide. One of the recordings is of Borsellino being questioned by Montalbano and Augello, proving no wrongdoing. Montalbano concocts a scheme to use the local news to influence the real killers to slip up.

When Montalbano discovers that Mariangela was cheating on Strangio, he digs deeper and discovers that Mariangela was having an affair with Strangio’s father, Professor Strangio. At the police get closer to Strangio, Montalbano reaches out to the local news to plant a story about Strangio’s impending arrest. Consumed by guilt, Professor Strangio writes a suicide note exonerating his son and confessing to Mariangela’s murder.

The police commission takes Montalbano off of Mariangela’s case. Montalbano continues with his investigation into Borsellino’s murder. He tries to convince the commissioner that there is more to the case. While listening to the digital recorder with Zito from the local news, they discover that one of the voices on the recording is the Honorable Mongibello. Montalbano has uncovered corruption at the highest level and concocts a scheme to expose Mongibello’s connection to the crime. He pretends to blackmail Mongibello and have him arrested when he drops off the blackmail money. When the Mongibello arrives at the blackmail drop off, he is killed by a sniper.

Montalbano expresses some guilt over Mongibello’s and Professor Strangio’s fates. As he reflects on his investigations, he begins to understand that everything happened just as it should have and justice was served.

A Voice in the Night from BookRags. (c)2022 BookRags, Inc. All rights reserved.