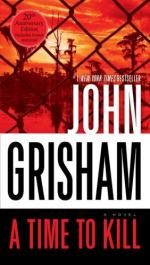 Related Topics
Gray Mountain
The Whistler
Camino Island
The Rooster Bar
The Reckoning: A Novel
The Innocent Man
The Summons
Witness to a Trial
The Guardians: A Novel
Camino Wind
A Time For Mercy
Sooley
Calico Joe
The Judge's List
Sparring Partners
The Boys from Biloxi

A Time to Kill Summary & Study Guide includes comprehensive information and analysis to help you understand the book. This study guide contains the following sections:

This detailed literature summary also contains Related Titles and a Free Quiz on A Time to Kill by John Grisham.

A Time to Kill was John Grisham's first novel, although it did not draw attention until after the publication of The Firm. Based on an actual rape case that Grisham witnessed, the book poses this question: Is a father justified in killing a man who rapes his young daughter? However, when the rapists are two white men and the victim is a ten-year-old black girl, another question surfaces: Is a black man ever justified in killing a white man? Thus begin the events of the novel, when Carl Lee Hailey murders his little girl's rapists and hires young Jake Brigance to defend him. The ensuing courtroom battle brings the local black citizenry, backed by the NAACP, in toe-to-toe combat with the Ku Klux Klan. Can Hailey get a fair trial by a jury of his peers when his peers are almost exclusively white, and how do god-fearing, upstanding white citizens behave when the clear moral issue is clouded by racial bias? These are the obstacles facing Jake Brigance as he accepts the case that will make or break his future as a lawyer.

One May in the early 1980s in northern Mississippi, two white good-for-nothings are repeatedly raping the young black girl they have kidnapped. Beaten and bloody, the girl hallucinates that her daddy is coming to save her. When finished with her, the men throw her in a shallow ravine. After she is discovered and hospitalized, the black sheriff quickly takes the two worthless white men into custody as the girl, Tonya Hailey, lies in surgery.

Jake Brigance, a young "street lawyer" with a wife and daughter, works alone in the historic Wilbanks building, having begun his career as an associate of the pedigreed but dissolute Lucien Wilbanks. Disbarred, Wilbanks has given his entire practice to Jake, a liberal who represents poor, blue-collar workers.

Carl Lee Hailey, Tonya's father, quickly makes it clear to Jake that the two men who raped his daughter will be killed. When Carl Lee's brother Lester arrives from Chicago, the two men plot revenge. Lester knows the courthouse, having been acquitted of murder a few years ago, represented by Jake Brigance. Carl Lee hides in the courthouse at closing and plans his attack.

"Cat" Bruster, a former Vietnam War comrade of Carl Lee's, now a wealthy master of the underground, provides an M-16. On Monday morning, Cobb and Willard appear in court, and as they are escorted down the back stairs, Carl Lee Hailey emerges from a closet and opens fire on them with an M-16, accidentally wounding a deputy. Then he throws the gun down, walks out to his vehicle and drives home. In his office across the street, Jake hears the commotion and runs over to investigate. A few minutes later, Carl Lee surrenders peacefully at his home and is taken into custody. He cooperates fully and is treated with respect and kindness by the understanding sheriff and deputies.

Jake Brigance takes on the case of Carl Lee Hailey, realizing that he will earn less than $1,000 for his efforts but hoping for great publicity. As the press descends on Clanton, the town becomes a media circus, and death threats begin arriving. All concerned with the case are intimidated and frightened. Indicted on three counts, Carl Lee could get the death penalty. Insanity seems to be his only defense. As the grand jury is empanelled, the Ku Klux Klan reinstates itself in Ford County. Jake's only hope will be a hung jury, providing he can get just one black juror in this mostly white county. The trial is set for July 22.

Over the next two months, Jake Brigance struggles to get an acquittal for a man who coldly planned a double murder and carried it out before eyewitnesses. Offered Cat's big-time Memphis lawyer, all expenses paid, Carl Lee temporarily fires Jake who, in turn, escalates his deception and manipulation to win back the case. Local black pastors raise funds for the Hailey family's needs and defense expenses, each skimming just a bit of the take, and they bring in the NAACP to ramp up the racial tension. The Klan responds by burning a cross in Jake's front yard.

As the trial date nears, nerves are frayed, and racial tensions increase. The judge imposes a gag order. The confessed murderer, now a hometown hero to the black population, emerges as the player with the greatest integrity. Having wrested the case away from both the rich Memphis lawyer and the NAACP, Jake Brigance now becomes a serious target of the Klan. When a would-be bomber is apprehended just outside his bedroom window, Jake sends his wife and daughter away to safety.

Without the stabilizing influence of Jake's wife, he slides quickly into immature, irresponsible behavior, surrounding himself with a colorful team of intelligent but eccentric advisers who share one common interest: drinking. One of these is a twenty-five-year-old third-year law student named Ellen Roark, attractive, sexy and brilliant. She provides expert clerking services to Jake along with some serious distraction. Meanwhile, the Klan burns crosses in the yards of prospective jurors. They assault and seriously injure the husband of Jake's secretary. As the defense team becomes intoxicated on margaritas, hundreds of black citizens hold a candlelight vigil across the street. The next day, the Klan arrives on the courthouse lawn to counter the rally of the blacks, and a furious altercation erupts.

Now the National Guard takes up residence on the courthouse lawn. The all-white jury of ten women and two men is sequestered out of town, and testimony takes only a few days. The state's key witness, the black deputy accidentally shot by Carl Lee, is sympathetic with the defense and well coached by Jake. He makes an excellent case for Carl Lee's temporary insanity. Near the end of the brief trial, as Jake enters the courthouse under heavy guard, a sniper makes an attempt on Jake's life, severely wounding and paralyzing a National Guardsman. That night his clerk, Ellen Roark, is kidnapped by the Klan and severely injured. She is ultimately hospitalized through the trial's end. The defense's expert witness, a depraved, semi-retired psychiatrist, is discredited on the stand, rendering the insanity plea virtually hopeless. Lucien Wilbanks, in desperation, has initiated an attempt to "buy" one degenerate juror. As testimony ends, Jake's house is burned to the ground as he sleeps safely at Lucien's. Jake wishes he had never heard of Carl Lee Hailey. The next day, though, delivering his closing arguments in borrowed clothes, Jake enjoys his finest hour.

As the jury deliberates, busloads of blacks are brought in, thanks to Lucien's efforts. They protest loudly and actually frighten the Klan away and intimidate the all-white jury. After several excruciating days, following a near deadlock, the jury returns a miraculous not-guilty verdict. Exultant, Jake flies to North Carolina to be reunited with his family. He is broke, without a home. His practice is at a standstill, but he is victorious in this case and riding a wave of adulation.

A Time to Kill from BookRags. (c)2022 BookRags, Inc. All rights reserved.