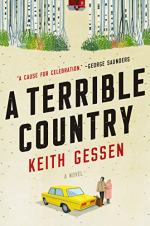 Keith Gessen
This Study Guide consists of approximately 38 pages of chapter summaries, quotes, character analysis, themes, and more - everything you need to sharpen your knowledge of A Terrible Country.

The vast majority of the novel takes place in Moscow, which is Russia’s capital and most populous city. Andrei’s family used to live in Moscow, but they moved to America when he was six years old. Near the beginning of the novel, Andrei returns to Moscow to take care of his elderly grandmother. While in Moscow, Andrei makes social connections with other people and eventually begins to feel at home there, but he eventually returns to America to accept an attractive job offer.

Seva lives in an apartment near the heart of downtown Moscow. The Russian government gave the apartment to her in the 1940s, and she has lived there ever since. She has been increasingly lonely ever since her husband died. Dima is in charge of taking care of Seva, but when Dima must leave the country due to legal trouble, he...

More summaries and resources for teaching or studying A Terrible Country.