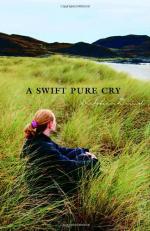 Siobhan Dowd
This Study Guide consists of approximately 42 pages of chapter summaries, quotes, character analysis, themes, and more - everything you need to sharpen your knowledge of A Swift Pure Cry.

"A Swift Pure Cry" by Siobhan Dowd, is a novel about coming of age in poverty, the weight of societal views on small town life, and the pain and suffering of life after the death of a loved one. Based on a true story, the book follows one family's struggles through heartache to find peace and resolution.

"A Swift Pure Cry" is a novel about fifteen-year-old Shell Talent's life, following the death of her mother. With a drunk and depressed father, Shell is left to care for her younger brother and sister in extreme poverty, not just as an older sister, but often as a mother figure. Distanced from God by her anger, Shell is surprised when a new pastor, Father Rose, comes to town and is able to guide her to again find God in her life. With few friends, Shell manages to find a kindred soul in Declan Ronin and Bridie Quinn, two other low income children in town. However, when she and Declan begin a romantic fling, she loses her friendship with Bridie, only to also lose Declan as well, as he leaves for America. Troubled, Shell begins speaking with Father Rose as well as thinking about her mother. One evening, after putting on her mother's old dress, her father comes in, drunk, and nearly molests her, not realizing it is his daughter.

A month later, Shell realizes that she is pregnant, but refuses to tell anyone. She hides the pregnancy from everyone, even quitting school when her figure becomes too large, but her younger brother and sister are aware. When she finally does have the child, it is stillborn. Unable to cope, Shell cares for her child for a day before she even admits to herself, and her tormented siblings, that the baby is dead. The family buries the young child in the field, and tries to move on.

Unfortunately, around the same time, another young woman gives birth, and allows the child to freeze to death in a cave. Accused of killing her baby, Shell is jailed, only to find her father has admitted to killing the baby. Confused, Shell confronts her father, only to find out he thinks he impregnated her the night he came in drunk. Shell confesses the name of her baby's father, and leads investigators to the body. Eventually Shell is cleared, and she realizes the killed baby likely belongs to Bridie, also impregnated by Declan. In the end, Shell's father sobers up. Although she is still a mother figure to her siblings, she learns to say goodbye to the past, accept the deaths of her mother and her baby, and embrace the freedom of her future.

More summaries and resources for teaching or studying A Swift Pure Cry.