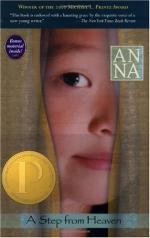 A Step from Heaven - Chapters 1, Sea Bubble- 3, Only God Can Summary & Analysis

Young Ju leaves her home in Korea to immigrate to America. Young Ju begins the long process of assimilation in her new country while struggling against her father's insistence that she become American but not too American.

In chapter 1, Sea Bubble, Young Ju is a toddler playing in the ocean with an adult. She is asked to be a brave girl instead of giving in to her fear of the waves. The unidentified adult praises her when she concurs her fear and crests the waves, asking to do it again and again.

(read more from the Chapters 1, Sea Bubble- 3, Only God Can Summary)

A Step from Heaven from BookRags. (c)2023 BookRags, Inc. All rights reserved.