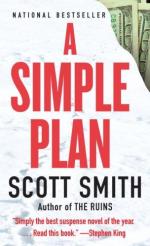 Scott Smith (author)
This Study Guide consists of approximately 38 pages of chapter summaries, quotes, character analysis, themes, and more - everything you need to sharpen your knowledge of A Simple Plan.

A Simple Plan: A Novel Summary & Study Guide includes comprehensive information and analysis to help you understand the book. This study guide contains the following sections:

This detailed literature summary also contains Topics for Discussion and a Free Quiz on A Simple Plan: A Novel by Scott Smith (author).

Hank Mitchell, his older brother Jacob and Jacob's friend Lou are riding together in Jacob's truck when a fox runs across the road in front of them. The truck ends up in a snow bank and Jacob's dog runs after the fox. The three men go after the dog and after hiking about a half hour, find an airplane that has crashed in the woods. Goaded into going inside to check on the pilot, Hank finds the pilot dead and a duffle bag filled with money. After some discussion, they agree that Hank will hold the money for six months and at the end of that time, if no one comes searching for it, they'll divide the money and each go their separate ways, richer than they'd ever imagined. Almost immediately they encounter the local law enforcement officer, Carl Jenkins, and Hank makes the impetuous decision not to turn the money in.

Things soon become touchy as Jacob, chronically unemployed, refuses to even search for a job to get himself through the intervening six months and Lou demands an early split to pay off gambling debts. Hank's wife, Sarah, says that they should put a portion of the money back on the play to waylay suspicion in the event the plane is found. While Hank is replacing a half million dollars of the money, Jacob has an altercation with a man from the neighborhood, Mr. Penderson, who is tracking the fox that had initially led Hank and the others to the plan. Jacob strikes Penderson and Hank finishes the deed, making it appear that Penderson had died in a snowmobile accident. Jacob then lets their misdeed slip to Lou who blackmails Hank for an early split of the money.

Hank promises that he'll go ahead and divide the money but tricks Lou into a mock confession that he'd killed Penderson, planning to use that as a way to keep Lou in line. Lou erupts and Jacob, believing that Lou is about to shoot Hank, shoots Lou. Lou's girlfriend Nancy flies into a rage and tries to shoot Hank, so he kills Nancy as well. Planning to turn himself in, Hank makes a phone call to Sarah who says that it's not too late to save the money. Using Sarah's plan, Hank summons Lou's landlord, Sonny, who has also learned of the money by this time. When Sonny arrives, Hank kills him as well, making it look as if Lou had arrived home to find Nancy and Sonny in bed together and had killed them both, threatening Jacob in the course of events and prompting Jacob to shoot Lou. Jacob has watched Hank set the scene and can't stop crying. Hank, knowing Jacob can't possibly stand up to police questioning, kills his brother with Sonny's shotgun as well.

Sarah learns that the money is from a kidnapping and that the pilot had an accomplice. The accomplice shows up, talking to Carl about a plane that might have gone down in the area. Carl, citing a conversation with Jacob, asks Hank to accompany them in search of the plane. Hank gives directions but says he can't go and Carl is killed. The accomplice is then killed by the FBI who asks Hank to identify the body. On the drive back home, Hank learns that the money they'd stolen is marked. He then learns that Sarah, believing they are now in the clear, has spent a bill to purchase a bottle of champagne. Hank plans to rob the liquor store but ends up killing both the clerk and a female customer before retrieving the single bill they'd spent.

More summaries and resources for teaching or studying A Simple Plan: A Novel.

A Simple Plan: A Novel from BookRags. (c)2022 BookRags, Inc. All rights reserved.