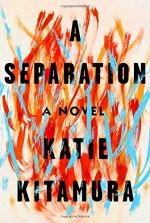 A Separation: A Novel Quotes

Katie Kitamura
This Study Guide consists of approximately 37 pages of chapter summaries, quotes, character analysis, themes, and more - everything you need to sharpen your knowledge of A Separation.

It’s for the best, darling, in the end she was never really one of us.
-- Protagonist (chapter 1)

I had decided to ask Christopher for a divorce but…I had not looked at him and spoken the words. It was important, this act of enunciation.
-- Protagonist (chapter 2)

More summaries and resources for teaching or studying A Separation: A Novel.

A Separation: A Novel from BookRags. (c)2021 BookRags, Inc. All rights reserved.