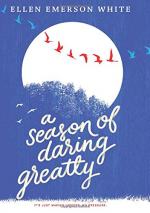 Ellen Emerson White
This Study Guide consists of approximately 67 pages of chapter summaries, quotes, character analysis, themes, and more - everything you need to sharpen your knowledge of A Season of Daring Greatly.

A Season of Daring Greatly Summary & Study Guide includes comprehensive information and analysis to help you understand the book. This study guide contains the following sections:

This detailed literature summary also contains Quotes and a Free Quiz on A Season of Daring Greatly by Ellen Emerson White.

Eighteen-year-old Jill Cafferty is a phenomenon. She is a starting pitcher for her high school team. As the narrative begins, she is playing her last game as a starter. Her status as a girl playing baseball always attracts the media, baseball scouts, and agents. This game is no different. After Jill's team wins the game, a scout talks to both Jill and her mother. The conversation reveals that Jill will have a choice to make after graduating from high school. She can either go to Stanford on a baseball scholarship that must be renewed annually, or she will have the opportunity to play professional baseball. Jill’s mother wants her to go to Stanford, but Jill prefers to play professional baseball after graduation.

While waiting on the draft to happen, Jill leads the normal life of a high school senior as she studies for her exams. Television networks call to invite her to attend the draft, but Jill declines the offers. The draft takes place during Jill’s exams. Jill has basically agreed that she will go to Stanford if she is not drafted on the second day. The first day of the draft comes and goes, and Jill is not drafted. Then on the second day, during her Spanish exam, Jill receives a call from the Pittsburgh Pirates informing her that team drafted her in the third round.

With the support of her family and friends, Jill accepts the challenge of being the first woman to play professional baseball and joins the team. Afterwards, she goes through the same on boarding process as the other draft picks. She discovers that she will be playing with the team’s Short Season team in Pomeroy. However, unlike her teammates, she must deal with members of the media who view her as a trailblazer. In addition, she must deal with players who are not happy to have her on the team. Despite the distractions, she does well with her bullpen session.

Afterward, Jill goes to Pomeroy with her mother and brother. When the time comes to go to her host family’s house, Jill's mother and brother take her and leave. Jill finds herself living on her own for the first time. The game of baseball is different for Jill now that she is on the team. The pitching staff moves her out of her comfort zone as they have her try different things. The trainers have different routines for her. In addition, she continues to face team members who do not want her there and the media. On top of all these issues, she does not play well. As a result, she begins to doubt whether she has made the right choice to play professional baseball instead of going to college. At one point, she remembers that there is a clause in her contract that will allow her to leave the team and go to Stanford instead.

However, despite all the challenges Jill faces, she has also made friends on the team and realizes that the team’s management and these friends want her to succeed. With their help, she perseveres. She learns how to tailor her new life to her personality. Then, finally, she draws on everything that she has learned to pitch a perfect game.

More summaries and resources for teaching or studying A Season of Daring Greatly.

A Season of Daring Greatly from BookRags. (c)2022 BookRags, Inc. All rights reserved.