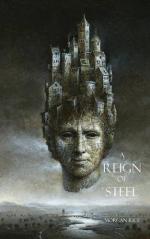 A Reign of Steel Symbols & Objects

The evacuation is a Biblical reference to the Exodus of the Old Testament of the Bible where Moses leads the persecuted Jews to freedom in the Promised Land. The evacuation of the persecuted people of King’s Court, led by Gwendolyn to the Upper Isles for safety and freedom, is strikingly similar to Moses. While Pharaoh followed Moses with a powerful army, Romulus follows Gwendolyn with a powerful army. Moses puts his faith in God, as does Gwendolyn.

Guwayne is set adrift by Gwendolyn in the final pages of the novel for the purpose of giving him a better life and in the hopes that he will survive Romulus’s invasion. This mirrors the Biblical account of Moses’s mother setting him adrift in the Nile in a basket so that he might have a better life and escape the murder of the firstborn...