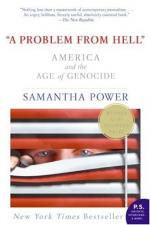 "A Problem From Hell:" America and the Age of Genocide Setting & Symbolism

Samantha Power
This Study Guide consists of approximately 52 pages of chapter summaries, quotes, character analysis, themes, and more - everything you need to sharpen your knowledge of "A Problem From Hell:" America and the Age of Genocide.

Turkey was the site of the first twentieth century genocide. The Turkish government killed nearly one million Armenians in 1915.

The UN is an international organization with member countries that include the United States. On December 9, 1948, the General Assembly passed the Genocide Convention, making genocide an international crime. UN peacekeepers were also present in the areas of some genocides, although the troops were often prohibited by member states from intervening.

During the late 1930s and early 1940s, Nazis killed 6 million European Jews and 5 million Poles, Romanians, homosexuals, political opponents, and others in the Holocaust. At the Nuremberg trials some Nazis were prosecuted for crimes against humanity which occurred after Hitler crossed an internationally recognized border. They were not prosecuted for the genocide that occurred within Germany itself.

Located in Southeast Asia, Pol Pot and other leaders in Cambodia orchestrated the genocide there. Beginning in...