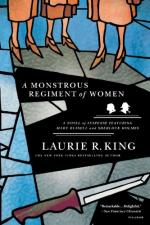 Laurie R. King
This Study Guide consists of approximately 27 pages of chapter summaries, quotes, character analysis, themes, and more - everything you need to sharpen your knowledge of A Monstrous Regiment of Women.

A Monstrous Regiment of Women Summary & Study Guide includes comprehensive information and analysis to help you understand the book. This study guide contains the following sections:

This detailed literature summary also contains Topics for Discussion on A Monstrous Regiment of Women by Laurie R. King.

This novel is the sequel to award-winning author's first book, The Beekeeper's Apprentice. A Monstrous Regiment of Women is a novel where Mary Russell is a pseudo-apprentice to the Great Sherlock Holmes. In this novel, Mary Russell is investigating some mysterious deaths of women that are members of The New Temple, run by a woman, Margery Childe, who is a visionary. Mary Russell has her own thoughts on women's rights in London in the 20th century and so she becomes involved with some of the Temple's causes through Mary's friend from Oxford, Veronica Beaconsfield.

When the novel opens, Mary is about a week away from her 21st birthday. As the sole survivor of a car accident that killed her mother, father and little brother, Mary is also the recipient of her parents' wealth. Mary was living with her aunt, her father's sister, for the last six years. Her aunt gives Mary an allowance, but the aunt is in control of the money until Mary reaches the age of 21. Mary studies theology and chemistry at Oxford and is finishing her final paper when the novel opens.

Before Mary comes into her inheritance, one of her disguises is to dress as a young man. When she comes into her inheritance and realizes she has to get into the Inner Circle of the Temple to investigate how the Temple and the women's deaths are connected, Mary uses her inheritance money to rent a flat, hire servants, and have tailor-made clothes sewn. As the novel unfolds, not only is Mary transforming and adjusting into her new life, but she is also realizing that her feelings for Holmes go beyond that of mentor and teacher.

From information that Mary uncovers on her own and from information that Sherlock Holmes, and Holmes's brother Mycroft provide, Mary starts to connect the deaths of the women Temple members to those wealthy enough to bequeath substantial money and assets to the Temple. This leads Mary to believe that someone in the Temple, possible the head of it, Margery Childe herself, is drawing wealthy women into the Temple in order to have them leave money and assets to the Temple, and then have the women killed.

During the investigation, Mary endures a few attempts on her own life and kidnapped. Her captors try to set her up to make it look as if Mary is a drug addict and involved in the mysterious deaths of the women at the Temple. By the end, with the help of Sherlock Holmes, Mary solves the investigation, but not without putting her life in danger several times in the process.

More summaries and resources for teaching or studying A Monstrous Regiment of Women.

A Monstrous Regiment of Women from BookRags. (c)2022 BookRags, Inc. All rights reserved.