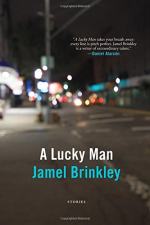 Plot Summary
+Chapters Summary and Analysis
No More Than a Bubble
J'ouvert, 1996
I Happy Am
Everything the Mouth Eats
A Family
A Lucky Man
Infinite Happiness
Wolf and Rhonda
Clifton's Place
Free Quiz
Characters
Symbols and Symbolism
Settings
Themes and Motifs
Styles
Quotes
Order our A Lucky Man Study Guide

Jamel Brinkley
This Study Guide consists of approximately 64 pages of chapter summaries, quotes, character analysis, themes, and more - everything you need to sharpen your knowledge of A Lucky Man.

This detailed literature summary also contains Quotes and a Free Quiz on A Lucky Man by Jamel Brinkley.

The following version of this book was used to create the guide: Brinkley, Jamel. A Lucky Man. Gray Wolf Press, 2018.

In Jamel Brinkley's collection A Lucky Man, he crafts nine distinct narratives. Together, the stories create a complex web of human voices, in conversation with one another, and with the universally literary human experience that transcends the confines of the page.

In "No More Than a Bubble," college sophomore Ben attends a party with his friend Claudius, while simultaneously exploring the influence of his father's life on his own developing sense of self, and his potential avenues to happiness. In "J'ouvert, 1996," 17-year-old Ty and his brother Omari spend a day away from home, wandering the streets of New York in an attempt to escape the confines of their mother and her boyfriend's relationship. Throughout the story, Ty attempts to adopt the facets of his father's character he remembers, as a means of understanding where he comes from and who he is allowed to be. In "Happy I Am," 9-year-old Freddy takes a trip to Scarsdale with St. Rita's day camp. Coming from an unstable home life, Freddy uses his imagination as an escape from the anxieties of his world. His experience in Scarsdale challenges Freddy's defense mechanisms, and asks him to look behind his guard as a means of reengaging with his childhood. In "Everything the Mouth Eats," Ben pretends to rebuild his broken relationship with his brother Carlos by attending a capoeira conference with him and his family. Though Ben believes he has done all he can to renew his brotherhood, that it is Carlos' fault they are no longer close, the narrative proves Ben's inability to let the traumas of his childhood go. The capoeira martial arts tradition offers Ben and Carlos an avenue for redemption and familial renewal.

In "A Family," Curtis struggles to rebuild his life and identity after his best friend Marvin dies and after he is released from prison. Curtis' missing friendship and his recent crime haunt Curtis's psyche and complicate his attempts to create a new existence for himself. By inserting himself into Marvin's family, dating his wife and spending time with his son, Curtis believes he can reconcile himself with the ills of his past. Marvin's family structure allows Curtis the opportunity to imagine a future beyond the weighty psychological influences of his crime and friend's death. In "A Lucky Man," Lincoln struggles to hold onto his one-dimensional concept of masculinity after his wife leaves him. His distant relationship with both his wife and daughter, cause Lincoln to feel weak and emasculated. He attempts to reclaim his sense of power by photographing random women without permission. His habit allows him to feel some authority over women in general, over the women in his life he feels have stripped him of his paternal control and identity.

In "Infinite Happiness," A.J. tries to decide if he should tell his friend Micah that he has slept with his girlfriend Cody. While A.J. initially believes he is in love with Cody, wants to be with her to achieve some coveted version of romantic bliss, the narrative later proves A.J.'s true desire is to upset the balance of power between him and Micah. Rather than Cody's companionship, it is actually Micah's identity and self-assuredness that A.J. desires. In "Wolf and Rhonda," Wolf and Rhonda return to Mott Haven for their high school class reunion. Desperate to reclaim his youthful vitality and sexual prowess, Wolf attempts to recreate a long ago sexual encounter with Rhonda in St. Paul's Church. Abused and ridiculed as a teenager, Rhonda returns as a means of distancing herself from her past. The reunion proves to Rhonda that the circumstances of her youth no longer have any power over her. In "Clifton's Place," middle-aged Ellis longs for companionship and love. A fixture at the neighborhood bar, Ellis hopes for community and family beyond "the folks" at Clifton's Place. After a young woman refuses his sexual advances, Ellis establishes a relationship with Sadie, the elderly owner of Clifton's. Thinking Ellis is in fact Clifton, her long lost lover returned, Sadie allows Ellis to feel loved, even if it is false, even if only for a night.

More summaries and resources for teaching or studying A Lucky Man.