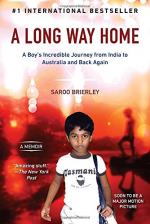 Saroo Brierley
This Study Guide consists of approximately 34 pages of chapter summaries, quotes, character analysis, themes, and more - everything you need to sharpen your knowledge of A Long Way Home.

Saroo Brierly (formerly Sheru, meaning “Lion” in Hindi) is the author and narrator of the memoir A Long Way Home. As a child, Saroo became lost in his native India at a train station while traveling with his brother, Guddu. Saroo spent many days on his own trying to find his mother (Kamla) and his siblings (Kallu and Shekila). Saroo was then taken to the police by a kind teenage boy. All attempts to find Saroo’s parents failed.

Saroo was put into ISSA and adopted by an Australian couple, John and Sue Brierly. While living in Australia, Saroo became thoroughly Westernized. Also, he came to deeply love his new Mum and Dad. Mantosh became his adoptive brother.

As a teenager and adult, Saroo went on to search for his Indian family. Using Google Earth, he finally found his old hometown. Saroo then set off on a...