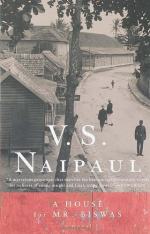 V. S. Naipaul
This Study Guide consists of approximately 45 pages of chapter summaries, quotes, character analysis, themes, and more - everything you need to sharpen your knowledge of A House for Mr Biswas.

The novel is written from the third person point of view from the perspective of Mr. Biswas. It is Mr. Biswas’s reaction to events that moves the plot along. His quirky character and his view of events provide pathos as well as humor to the novel.

The novel is set in various parts of Trinidad spanning the period from the early to mid-twentieth century. During this time, Trinidad had a diverse population that included different races and ethnicities as well as different religions. This diversity is seen in the novel as characters slip between speaking Hindi and speaking English, and a variety of religious practices are observed.

The language in the novel varies. The narrative is rich with imagery and descriptive details, while the dialogue conveys the non-standard dialect of the people of Trinidad, and it is employed in a...

More summaries and resources for teaching or studying A House for Mr Biswas.

A House for Mr Biswas from BookRags. (c)2022 BookRags, Inc. All rights reserved.