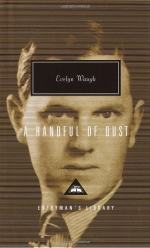 Evelyn Waugh
This Study Guide consists of approximately 49 pages of chapter summaries, quotes, character analysis, themes, and more - everything you need to sharpen your knowledge of A Handful of Dust.

A Handful of Dust Summary & Study Guide includes comprehensive information and analysis to help you understand the book. This study guide contains the following sections:

This detailed literature summary also contains Topics for Discussion and a Free Quiz on A Handful of Dust by Evelyn Waugh.

Tony and Brenda Last are a young married couple who have been together for eight years. The have a son named John Andrew and they live on a wealthy estate called Hetton. The estate is in England, two hours outside of London. One weekend, a young man named John Beaver holds Tony to a casual invitation made for him to visit Hetton. Brenda meets Beaver for the first time and is attracted to him. At Hetton, Brenda has been cut off from the social scene she once enjoyed in London. Beaver and Brenda spend the weekend gossiping on all of the latest parties, people, and trends. The next time she visits her sister in London she immediately begins to inquire about Beaver. It isn't long before she sees him and makes advances toward him. An affair begins and Brenda decides to get an apartment in London to make it easier for her to spend time with Beaver. She convinces her husband to pay for the apartment,giving him the impression that she is going to take a course in economics. Brenda spends more time in London that at home. Everyone in the London scene knows about the affair, but Tony never figures it out.

A tragedy befalls the family and John Andrew Last is killed in a horse accident during an annual hunt at Hetton. Brenda decides to choose Beaver over Tony and asks for a divorce. Tony is completely blind-sided by the entire situation; losing his son and wife within the same week. He plays fair and decides to give Brenda a divorce, which at this time means that he must pretend that he is the one having the affair. After a time, when Brenda becomes greedy and unreasonable, Tony takes a stance. He refuses to pay the money that Brenda and her family try to squeeze out of him and decides to take a six month trip, allowing Brenda to think about what she has done.

Tony's trip takes him to Brazil with a strange doctor named Messinger. They explore unknown territory in search of a lost or legendary city. It becomes clear that the doctor's plan was not well thought out and everything starts falling apart quickly. Tony becomes deathly ill with fever and the doctor drowns trying to find help for him. Meanwhile in London, Brenda has no money, so Beaver and her friends all leave her to her misery. They have no interest in her now that she is no longer a part of the upper class elite.

Delirium leaves Tony wandering through the forest and he finds the city that he and Messinger searched for. Unfortunately for Tony, the city is led by a deranged old man, Mr. Todd. The man is illiterate, and once had his father read to him from a library of Charles Dickens books every day. Once his father passed away the man longed for someone to take his place reading the stories. Since no one comes to the city much, after nursing Tony back to health, Todd keeps him prisoner. Tony spends the rest of his days trapped there and the estate at Hetton is passed on to his cousin Richard Last. Brenda remarries quickly to Tony's old friend Jock and Beaver moves to New York.

More summaries and resources for teaching or studying A Handful of Dust.

A Handful of Dust from BookRags. (c)2022 BookRags, Inc. All rights reserved.