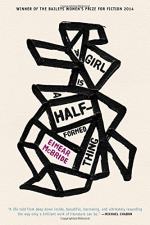 A Girl Is a Half-formed Thing - Part 1 Summary & Analysis

Eimear McBride
This Study Guide consists of approximately 30 pages of chapter summaries, quotes, character analysis, themes, and more - everything you need to sharpen your knowledge of A Girl Is a Half-formed Thing.

Part 1, Chapter 1 – The unnamed narrator’s brother suffers from a cancerous brain tumor. Their mother seeks a second operation to attempt to remove the tumor, but this is not possible. Chemotherapy is undertaken, which shrinks the tumor. The family thanks God for the success. The father later leaves the mother with a fifty-pound note, and then leaves the family. All of this is recounted from the time the unnamed narrator is in her mother’s womb.

Part 1, Chapter 2 – The narrator is now two. Her brother is four or five. The narrator hates getting baths and brushing her teeth.

Part 1, Chapter 3 – The narrator is now five. Her brother is seven or eight. The family lives, isolated, in the countryside. The narrator and her brother like to find slugs in the house, and their mother wonders where the slugs are able to get in. When it...

More summaries and resources for teaching or studying A Girl Is a Half-formed Thing.

A Girl Is a Half-formed Thing from BookRags. (c)2021 BookRags, Inc. All rights reserved.