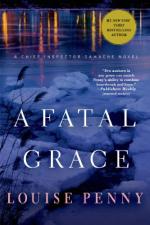 This detailed literature summary also contains Quotes and a Free Quiz on A Fatal Grace by Louise Penny.

The following version of the novel was used to create this study guide: Penny, Louise. A Fatal Grace. Minotaur Books. May 15, 2007. Kindle.

In the novel A Fatal Grace by Louise Penny, good and evil are at odds when a cruel and insensitive woman named CC de Poitiers moves into the fairy tale town of Three Pines. Since so many people did not like CC, Chief Inspector Armand Gamache has a long list of suspects through which to comb when investigating her murder. CC de Poitiers was electrocuted during a holiday curling match. Three elderly ladies, who were friends of CC’s mother confessed to the murder, but Gamache had to determine if their confessions were sincere or if they were covering for the real murderer.

Christmas time was generally magical in the small town of Three Pines. The celebration had been marred when CC de Poitiers berated Crie, her overweight, socially backward daughter for singing out loud during the midnight Christmas Eve service. The villagers who heard Crie sing believed she sounded like an angel and compared CC’s treatment of her daughter to a murder using words. The next day during the annual curling match, CC was killed by electrocution. The coroner convinced Gamache the death had been caused intentionally because so many details had to have come together just right for CC to be killed.

Gamache began interviewing witnesses and suspects but could find no one who would admit to seeing anything out of the ordinary during the curling match. Because he could find no solid evidence, Gamache began to wonder if the people of Three Pines had collectively decided to murder CC just to get the hateful woman out of their town. While investigating CC’s death, Gamache also was working on the death of a vagrant in Montreal. As he worked on clues from both murders, Gamache realized a vagrant, named Elle, was from Three Pines originally. She was also CC’s mother. Émilie “Em” Longpré, an elderly matron from Three Pines, finally told Gamache that she and her friends, Kaye Thompson and Bea Mayer, had been close friends with Elle when they were growing up. Elle had shown signs, even as a child, of having a mental illness. It was while she was away from Three Pines and out of touch with Em, Kaye, and Bea that Elle got pregnant with CC. The child was later taken from her, and Elle was put into a psychiatric hospital. Em, Kaye, and Bea met Elle later. She was living on the streets, but the women were unable to convince Elle to live any other way.

On one particularly cold day, a snowstorm was forecast to hit Three Pines. Em left a letter for Gamache telling him that she, Kaye, and Bea had killed CC. They planned to go to the curling rink (where the murder had taken place) and commit suicide by staying outside until they froze. Gamache wanted to respect their wishes but realized at the last moment that they could not have killed CC because they did not understand the role of the metal studded shoes she was wearing in her electrocution. Gamache tried to save the women, but it was too late for Em, who had already died of hypothermia. Gamache then went to the home where CC’s daughter and husband lived. Crie was taken into custody for her mother’s murder.