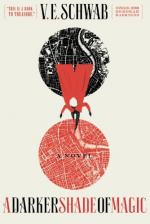 A Darker Shade of Magic: A Novel Summary & Study Guide

A Darker Shade of Magic: A Novel Summary & Study Guide includes comprehensive information and analysis to help you understand the book. This study guide contains the following sections:

This detailed literature summary also contains Quotes and a Free Quiz on A Darker Shade of Magic: A Novel by V. E. Schwab.

NOTE: The following version of this book was used to create this study guide: Schwab, V.E. A Darker Shade of Magic. Tor, 2015.

Kell is an Antari, a blood magician, living in the kingdom he has dubbed “Red London” with his adopted family, the Mareshes, who rule the city. There are four Londons, existing in alternate dimensions: Grey, Red, White, and Black London, and Kell is one of the few with the magical capacity to pass between them.

While Kell is in another dimension on a diplomacy mission, his brother Prince Rhy is visited by Kell's arch nemesis, another Antari named Holland, who comes from White London. Holland brings Rhy a necklace as a birthday gift.

Meanwhile, in magic-free Grey London, an intrepid thief and would-be pirate named Lila Bard kills her landlord when he tries to assault her. She shows up at the local tavern, the Stone's Throw, where she is taken in by the owner, a man named Barron.

Kell brings a message to the Dane twins, Athos and Astrid, who have cast a spell over Holland to keep him under their control. White London is a cold and inhospitable place where the people are starving. The twins are bitter because long ago the people of Black London lost control of their magic and the city erupted into chaos before White London (with no help from Red London) stepped in to quell the uprising and shut the doors between dimensions. A woman stops Kell on his way home and asks him to take a letter to her brother in Red London, passing him the letter and payment for his trouble.

When he gets home, Kell realizes that the payment is actually a stone, a forbidden relic from the ill-fated Black London. Suddenly, he is pursued by an assassin. Kell kills the assassin and flees to Grey London where he collides with Lila Bard, who steals the black stone from his pocket. Back in Red London, the dead assassin awakens, reanimated by proximity to the stone, which leaves a zombie-like plague in its wake. Kell uses magic to find Lila at the Stone's Throw and reclaim the stone. After he leaves, Holland shows up and demands to know where Kell is, because he wants the black stone. Kell reappears, and the two Antaris fight. Kell is badly hurt, but Lila knocks Holland unconscious and they flee.

Kell and Lila formulate a plan to return the stone to Black London, but they need to move through each dimension in turn. They return to Red London to find a token that will allow them into White London. They find that Holland has burned down Red London's tavern where Kell kept his tokens. Holland appears and tells them he also killed Barron. Kell and Lila use the black stone to make themselves invisible and flee. They visit a pawnshop where they hope to find a particular token, a white rook from a chess set. The pawnshop owner calls the palace guards because the royal family has reported Kell missing. Lila turns herself invisible again as the guards take Kell away, and she sees one of them stay behind to stab the pawnshop owner. He seems to be operating under a spell. When the guard is gone, Lila grabs the white rook.

Lila arrives at the palace to look for Kell and there is a masquerade underway for Prince Rhy's birthday. The king and queen also appear to be under a spell. Kell is being held in Prince Rhy's bedroom, where Astrid Dane has taken over the prince's body and consciousness using the necklace delivered by Holland. She wants to use the black stone to reopen the doors between dimensions so that she can rule over both Red and White London. Kell's black stone is only half of a larger piece; her brother Athos has the other half, and the two pieces must be joined. Lila comes to Kell's rescue, but Astrid Dane stabs Prince Rhy in the stomach, removing the necklace first and putting it on a guard, who then begins acting on her behalf. Kell summons a magic door to get them out of the palace, and they go to the magic school where Kell was trained. He saves Prince Rhy's life, using the black stone to bind their two lives together, so that if one lives, so will the other. Lila and Kell leave Rhy at the school to recuperate and set off for White London. As they travel between dimensions, however, Kell is pulled back into Red London by Holland. They fight, but Kell is stronger with the black stone in his possession and he kills Holland.

In White London, Kell confronts Athos Dane. They fight using magic, and Athos summons a huge snake. The spell backfires and the snake attacks Athos, killing him. Kell destroys the snake with a magic-dispelling knife from Red London. Meanwhile, Lila sets out to kill Astrid Dane, who is senseless in the throne room, her consciousness still in Red London. She wakes up, however, and casts a spell to make herself look exactly like Lila, before knocking Lila out and going after Kell. The ruse fails; Kell can tell immediately she is not Lila and he stabs her to death.

Kell merges the two black stones and is plummeted into a shadowy world where he confronts a physical embodiment of the stone's magic, which is fighting for control of his mind and body. Kell wins and sends the black stone into another dimension, dispelling the zombie plague in the process. He returns with Lila to Red London where Prince Rhy is recuperating. The population of Red London is wary of Kell, unsure what role he played in the prince's ordeal. Lila sets sail from Red London's harbor to parts unknown, ready for her next adventure.