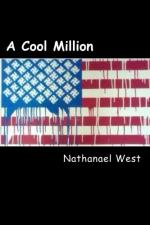 Nathanael West
This Study Guide consists of approximately 60 pages of chapter summaries, quotes, character analysis, themes, and more - everything you need to sharpen your knowledge of A Cool Million.

This detailed literature summary also contains Quotes and a Free Quiz on A Cool Million by Nathanael West.

The following version of this book was used to create this study guide: West, Nathanael, A Cool Million, CreateSpace Independent Publishing Platform, 2014

Lemuel Pitkin is a young man finishing high school in a small town in Vermont. His mother, a window, is approached by a lawyer and informed she has 90 days to pay off the full value of her house. Lemuel goes to the president of the local bank, Mr. “Shagpoke” Whipple, former U.S. President, to ask for a loan. Mr. Whipple denies him the loan and advises him instead to go to New York and seek his fortune like many great Americans. Mr. Whipple gives him a loan for thirty dollars on his mother’s cow to start his trip. Lemuel spots his childhood crush, Betty Prail, fleeing from a rabid dog on his way home and saves her, killing the dog in the process. The owner of the dog and town bully, Tom Baxter, fights him, loses and then tricks Lemuel into a handshake in order to strangle him. While Lemuel is passed out, Tom rapes Betty and leaves her in the bushes. Betty is picked up by Italian sex traffickers and sold to a brothel in New York specializing in having prostitutes in traditional cultural dress from every country.

Our hero buys a train ticket to New York and is robbed by a flamboyant stranger who claims to be the nephew of the mayor of New York. While robbing Lemuel, he accidentally leaves a diamond in his pocket and Lemuel sells it to another stranger on the train. The stranger is caught with the stolen ring and scapegoats Lemuel, sending him to jail. While in jail Lemuel has all of his teeth removed against his will and runs into Mr. Whipple as an inmate. Mr. Whipple tells him his mother has gone missing and lost her home, but urges him to continue his quest.

Luckily, the governor pardons Lemuel. Upon arrival in New York, he visits his mother’s house, which has been sold in its entirety to an interior decorator. The shopkeeper pays Lemuel for advice on the original decoration of the house. In Central Park, he sees an antique wagon careening through the streets, manned by Asa Goldstein, the man who owns the interior decoration company. Lemuel intervenes to save an elderly man and his daughter from the horses and is kicked in the eye. An opportunistic poet starts regaling the crowd with the story of Lemuel’s heroism and his underlings rob Lemuel. Lemuel passes out and later loses his eye in the hospital.

Lemuel encounters Mr. Whipple, now broke, and they go to the Salvation Army for coffee. Mr. Whipple begins to wax political and starts gathering a crowd to talk about his new National Revolution Party. They meet Jake Raven, a Native American who wants to join the cause. An operative working for the communists and bankers calls in reinforcements to violently shut down the rally. Jake Raven and Lemuel escape, but Mr. Whipple does not.

Lemuel is homeless until a stranger approaches him with a job visiting jewelry stores, pretending to lose his glass eye and offering a reward to the shop owner for its return. He thrives in this position until visiting Chinatown with a new friend. Betty spots him as he passes the brothel and throws a bottle with a frantic message at his feet. Unfortunately, it draws the attention of her captor and he sends a henchman to kidnap Lemuel. They attempt to force Lemuel into prostitution, but his false teeth and eye fall out in his first interaction with a client and they beat Lemuel and throw him out into the street instead. Betty is able to escape during the mayhem.

Unfortunately, Lemuel lands in jail for trying to help Betty. He takes a guilty plea in order to avoid a life sentence, but realizes upon his release his savings are stolen. On the steps of the bank, Lemuel runs into Betty again. While warming up in Grand Central Station, they encounter Mr. Whipple and he urges them to join him and Jake Raven in his quest for gold in California.

On their way to California, they stop in Chicago and Lemuel splits from the group to buy a new false eye and teeth. A man, who is really a communist operative, claims Mr. Whipple has had an accident and is in the hospital in order to kidnap Lemuel. A car crashes into their vehicle and Lemuel escapes from the operative, but loses his thumb.

Now in California, a violent cowboy approaches the group and eventually rapes Betty while she is alone at camp. Lemuel tries to save her but becomes caught in a bear trap laid by the cowboy. The man kidnaps Betty and leaves. Jake Raven attempts to send his tribe to help, but they scalp Lemuel instead. Mr. Whipple finds him and takes him to the hospital, where he officially loses his leg. They join a traveling freak show only to discover it is communist propaganda. When the show arrives in Mississippi, Mr. Whipple makes a speech declaring the subversive nature of the show. The crowd turns into a riot and they lynch Jake Raven.

Mr. Whipple and Lemuel are split up after the riot and our hero hitches a ride on a train to New York. Lemuel finds a job in a comedy act as himself, beaten until his fake appendages fall off. In this role, a messenger of Mr. Whipple’s informs him the National Revolutionary Party is taking over NYC and gives him a speech to read.

On stage, Lemuel reads two lines before the operative of the communists and bankers shoots him from the crowd. In the future, Lemuel Pitkin Day is now a national holiday celebrating Lemuel as a martyr for the National Revolutionary party. Betty and Lemuel’s mother cry on the sidelines. Mr. Whipple makes a speech about the unfairness of Lemuel’s misfortunes and his narrative as an emblem of what the new government seeks to prevent. The book ends with the crowd roaring, “Hail, Lemuel Pitkin. All hail, the American Boy!” (116).

More summaries and resources for teaching or studying A Cool Million.