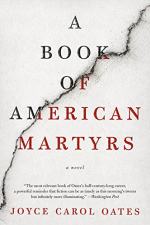 Related Topics
Because It Is Bitter, and Because It Is My Heart
Bellefleur
Four Summers
How I Contemplated the World from the Detroit House of Correction and Began My Life Over Again
Joyce Carol Oates

Joyce Carol Oates
This Study Guide consists of approximately 122 pages of chapter summaries, quotes, character analysis, themes, and more - everything you need to sharpen your knowledge of A Book of American Martyrs.

A Book of American Martyrs Summary & Study Guide includes comprehensive information and analysis to help you understand the book. This study guide contains the following sections:

This detailed literature summary also contains Quotes and a Free Quiz on A Book of American Martyrs by Joyce Carol Oates.

The novel follows the story of the collision of two men - both martyrs in some way - and the ripple effects on their wives and families in the wake of both of their deaths. The first part is “Soldier of God: Luther Amos Dunphy; November 2, 1999.” The novel begins with Luther gunning down Gus Voorhees, an abortion provider, and Tim Barron, his escort, at the Broome County Women’s Center in Ohio. He explains how he attended a pro-life lecture, and decided to join Operation Rescue to become a martyr to the pro-life cause. Luther tells the story of his daughter Daphne, his toddler with Down’s syndrome, and how she died in a car accident caused by him. Luther also describes his teenage years, when he lusted after women, raped his classmate Felice, and beat up vulnerable classmates. In “The Calling” Luther explains taking classes a decade previously at the Toledo School of Ministry and his ultimately unsuccessful attempts to become a minister. In the final chapter of this part, Luther describes the morning of the shooting, and the first part ends with Luther in prayer.

The second part, “The Life and Death of Gus Voorhees: An Archive” is told from Naomi’s perspective. The part starts with childhood memories of Naomi, of growing up as the daughter of an abortion provider. She and her family were often physically and emotionally abused by classmates both before and after Gus’s death. It details the adoption of her sister Melissa. Naomi describes in the chapter “Application, University of Michigan School of Arts and Sciences” why she wants to attend U of M, and how she wants to document her father’s life. The part transitions into descriptions of Naomi’s childhood and memories of her family, and her father’s devotion to his work. In “False Alarm” her family walks into the women’s center right after it has received what they thought was a bomb. In “No Good Deed” Naomi describes all the women (even the pro-life activists) who came into have an abortion and all their reasons. In “Like a Candle Blown Out” Naomi describes her mother answering the phone to learn of her husband’s murder. The subsequent chapters describe Jenna identifying her husband’s body; the children being pulled out of class and school, and moving to Ann Arbor. The children are devastated and angry; they blame their mother for Gus’s death. They will return to St. Croix much later, and when they clean out the house they hear Gus’s voice in “Voice Mail.”

The trial of the People of the State of Ohio v. Luther Amos Dunphy begins, and he pleads not guilty, and Jenna attends. Two jurors refuse to budge and the judge is forced to declare a mistrial. Jenna goes on the road, while her children live with Gus’s father in Ann Arbor. In “‘No More’” Jenna tells a pleading Naomi that she can no longer be a mommy, and Jenna leaves.

The third part, “‘The Hammer,’” starts with Luther in court receiving the verdict of mistrial, and everyone is elated. His family has moved, and children started new schools. Dawn is having a particularly tough time, and is held back a year. Her classmates give her a hard time. September 11th happens, and the family begins to think it is the end of days, as Luther heads back to trial. In “Verdict” and “Sentence” the family learns that in the second trial, the judge has declared Luther guilty of two counts of homicide, and is sentenced to death by lethal injection. In “Mud Time” Dawn is attacked and sexually assaulted by some school boys, and a few weeks later she attacks them back with a hammer and is expelled. In “Holy Innocents,” Edna Mae has joined the Pentecostal church, and forces the children to join her in Cleveland to bury aborted fetuses they find in a dumpster. In “Death Warrant” Luther is put to death from lethal injection, and though he ultimately dies, the process is painful and botched.

Part 4 “The Embrace: March 2006 - March 2010” includes seven chapters told from Naomi and Dawn’s perspectives, as both of their lives change. Naomi and Darren receive the news of Luther’s death in “Autoimmune” and at the end of the chapter Naomi falls down some icy stairs, with a severe concussion. She is revived in “Alone” and feels renewed. In “Emptiness” Naomi moves in with her grandmother in New York City. In “‘Unwanted’ - ‘Wanted’” Lena explains how she had not wanted Gus, and how she had left him as a child. In “Hammer of Jesus” Dawn starts to go to the Dayton gym and trains to be a boxer. In “Jesus is Lord” she gets a “Jesus is Lord” tattoo and starts to win her fights, always sending money home.

The final section - Part 5 - “The Consolation of Grief”- includes six chapters. In “Muskegee Falls, Ohio: September 2011” Naomi returns to Muskegee and films the town, interviewing several people involved with the murders. In “Katechay Island,” Naomi, Darren, and Jenna meet to scatter Gus’s ashes on Katechay Island. After this they take a nap and Naomi and Darren wake to find Jenna has left without telling them. In “Fight Night, Cincinnati” Naomi flies out to see D.D. fight and interviews her awkwardly, without telling D.D. who she is. In “Family,” Naomi has grown close with her grandmother and her half-uncle - close enough that she will inherit her grandmother’s will. In “The Consolation of Grief” Naomi flies to Cleveland to watch the Midwest title match where D.D. loses her first fight. Naomi interviews her again, but this time she tells D.D. who she is, and the novel ends with the two daughters embracing.

More summaries and resources for teaching or studying A Book of American Martyrs.

A Book of American Martyrs from BookRags. (c)2022 BookRags, Inc. All rights reserved.