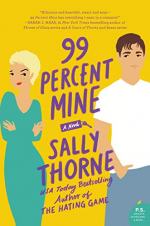 Sally Thorne
This Study Guide consists of approximately 44 pages of chapter summaries, quotes, character analysis, themes, and more - everything you need to sharpen your knowledge of 99 Percent Mine.

99 Percent Mine Summary & Study Guide includes comprehensive information and analysis to help you understand the book. This study guide contains the following sections:

This detailed literature summary also contains Quotes and a Free Quiz on 99 Percent Mine by Sally Thorne.

The following version of this book was used to create this study guide: Thorne, Sally. 99 Percent Mine. New York: William Morrow Paperbacks, 2019.

The narrator, Darcy Barrett, begins by recounting the lessons she has learned through bartending while she works at a local biker bar. Despite having a background in photography, Darcy eschews her training and chooses instead to bartend. She works with a colorful cast of characters, but focuses specifically on Holly and Keith, a fellow bartender and bouncer, respectively. The first inkling readers receive that Darcy is slightly more hard-edged comes when she casts Holly as far too sweet to work in the bar where she feels incredibly comfortable.

Next, Darcy must fend off the romantic advances of Keith, leaving bruises. She returns home, shaken, to find another car in her driveway. When she encounters Tom Valeska after not seeing him for years since his engagement to his fiancé, Megan, the novel begins to take off. Darcy has been harboring a crush on Tom since their childhood years as neighbors, and seeing him again is completely overwhelming. He has come back into the picture as the contractor hired to complete renovations on her deceased grandmother's cottage. However the clash between Darcy and her twin brother Jamie sets another stage for conflict within the novel in their vision for the renovations.

Darcy and Tom begin to grow closer as he works on the house, but he tries his best to keep a distance from her. However, Darcy has simultaneously decided that she wants to make her feelings known to Tom and begin a relationship with him. After weeks of dancing around each other, Darcy finally propositions Tom to which he rejects her and increases the distance in their relationship. This point in the novel hits a low for Darcy because her feelings of rejection by Tom mix with the rejection she has always felt from her family and from Jamie in particular.

As she and Tom begin to recuperate their relationship, they fall into a sexual arrangement and his request that she not tell her brother leads to another round of conflict between them. When Darcy is unable to honor Tom's request, he flies off the handle and leaves the house, leaving Darcy and Jamie to hash out their issues together. They eventually come to the conclusion that the only thing they both want is to have their childhood friend back with them, and they reconcile.

Tom is eventually also ready to forgive Darcy and they reconcile in the airport on their way for a trip with Jamie and his new girlfriend, Darcy's friend Truly.

More summaries and resources for teaching or studying 99 Percent Mine.

99 Percent Mine from BookRags. (c)2022 BookRags, Inc. All rights reserved.