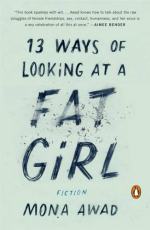 Plot Summary
+Chapters Summary and Analysis
Chapter One: When We Went Against The Universe
Chapter Two: Your Biggest Fan
Chapter Three: Full Body
Chapter Four: If That’s All There Is
Chapter Five: The Girl I Hate
Chapter Six: I Want Too Much
Chapter Seven: My Mother’s Idea of Sexy
Chapter Eight: Fit4U
Chapter Nine: She’ll Do Anything
Chapter Ten: The von Furstenberg and I
Chapter Eleven: Caribbean Therapy
Chapter Twelve: Additionelle
Chapter Thirteen: Beyond the Sea
Free Quiz
Characters
Symbols and Symbolism
Settings
Themes and Motifs
Styles
Quotes
Order our 13 Ways of Looking at a Fat Girl Study Guide

13 Ways of Looking at a Fat Girl Summary & Study Guide

Mona Awad
This Study Guide consists of approximately 56 pages of chapter summaries, quotes, character analysis, themes, and more - everything you need to sharpen your knowledge of 13 Ways of Looking at a Fat Girl.

13 Ways of Looking at a Fat Girl Summary & Study Guide includes comprehensive information and analysis to help you understand the book. This study guide contains the following sections:

This detailed literature summary also contains Quotes and a Free Quiz on 13 Ways of Looking at a Fat Girl by Mona Awad.

13 Ways of Looking at a Fat Girl by Mona Awad is a fictional account of Elizabeth's battle with obesity. For as long as she can remember, Elizabeth has been self-conscious about the extra weight she packs around. She desperately wants to fit in; to be considered worthy of dating, and to be accepted by her peers. Instead, she and her best friend Mel who is also overweight, spend hours together imagining how things could be different.

Elizabeth begins an earnest attempt to lose weight when she meets Tom, fearing that she might accidentally smother him as they slept beside each other in bed. She manages to cut her physical body down by half, dieting with the determination of a woman possessed. By the time she introduces Tom to her mother for the first time, she is able to wear clothing that she would never have considered in the past and her mother is so proud of her that she not only insists on showing her off to her co-workers and managers, but also buys her clothing that show off her new look.

Elizabeth’s mother is also obese, and Elizabeth notices her mother's health is deteriorating, but her mother has no interest in discussing it despite losing the feeling in her legs now and then, and the obvious struggle that it is for her to breathe. Soon after, she passes away and Elizabeth spirals, depressed and lost in the world for a time. She finds herself in a cycle of temptation and diet, falling on and off in her efforts to be slim and telling herself she is doing it all for him. Tom misses the woman he married however. Elizabeth becomes increasingly embarrassed by the left over stretch marks and rolls that remain after great weight loss, and hides her naked body from him when she never had before. She pushes him away, using one excuse after another. Then she discovers that Tom has been hiding in his office to watch pornography with plus sized women. When Elizabeth discovers the web pages he enjoys, she and Tom fall apart.

Eventually, Elizabeth moves back to her mother's apartment, leaving it exactly as it was despite her father's efforts to inject change. She reconnects with her best friend Mel, and eventually moves into the South Tower of Phase One in the Beyond the Sea complex. Her window overlooks the Malibu Club Spa and for a long time, Elizabeth works out on Lifecycle One, trying to rid herself of the last vestiges of her fat body but try as she might, she feels as though she is stagnating. One day, she simply quits going down to the gym but it isn’t until her building catches fire that she finally realizes the folly of weight loss at the expense of life.

The reality hits her hard as she and another resident are standing outside waiting for the fire department while another resident cycles on alone in the gym despite the danger, the alarms and the sirens. In that moment Elizabeth discovers a basic truth and considers its ramifications. Armed with the knowledge that life requires moderation, Elizabeth suddenly feels as though she can change everything.

More summaries and resources for teaching or studying 13 Ways of Looking at a Fat Girl.

13 Ways of Looking at a Fat Girl from BookRags. (c)2022 BookRags, Inc. All rights reserved.