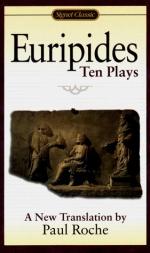 This detailed literature summary also contains Topics for Discussion and a Free Quiz on 10 Plays by Euripides.

This book is composed of ten plays by the poet Euripides in English translation. Although the plays deal with different issues, there are several common themes that run through many of the plays and Euripides consistently presents interesting characters out of the material of Greek myth.

In the Alcestis, Euripides presents a drama that deals with issues of hospitality, the treatment of friends and the proper relation of the wife to the husband. Euripides suggests that the common view is flawed and that it would be unreasonable to ask a wife to die for her husband. In Medea, Euripides continues investigating the role of husband and wife by showing a wife, Medea, supplanted by a new love. Medea decides it is better to make the husband who has wronged her pay for his crimes and kills her children and Jason's new wife. We are asked to consider the propriety of treating foreigners in a way that forces them into desperate situations. Hippolytus is the story of Hippolytus the virginal son of Theseus who has offended the goddess Aphrodite by remaining chaste. Aphrodite gives Phaedra, Hippolytus's stepmother, an unquenchable lust for her stepson, who refusing to satisfy her incestuous lust, she kills herself and Theseus, believing Hippolytus has raped his wife, kills Hippolytus. Part of the reason for the tragedy is the refusal of the main characters to break a promise. Euripides asks us to consider what price is too high for propriety.

Andromache shows the conflicts that arise when a man has two wives or lovers and simultaneously attacks the Spartans. Ion is a case of mistaken identity and questionable evidence leading to an uncommonly happy ending. The Trojan Women shows the human cost of war, especially for non-combatant women and children. Electra is a new take on a traditional story of Greek tragedy. Instead of portraying Orestes and Electra as noble avengers, Euripides shows the matricide as what it is, a horrible act that is the product of corrupt characters. Iphigenia among The Taurians shows Orestes and Iphigenia attempting to outsmart one god, Artemis, to fulfill the wishes of another god, Apollo. Human sacrifice is presented and we are asked to consider whether or not the gods themselves are unjust and corrupt. The Bacchants is a masterful work showing the power and mystery of the god Dionysus. Greek tragedies were preformed at a festival held for Dionysus and this play aptly shows the power of the god in tones of fear and reverence. Euripides is also commenting here on the birth and practice of tragedy. Written directly after The Bacchants and just before Euripides's death, Iphigenia at Aulis shows the family of Agamemnon in an bad light; this time, though, not to attack or ridicule them, but to show the possibility of character development in drama.

In all of his plays, Euripides shows an interest and a kind of sympathy with the underdog, especially women and slaves. His use of character development and his reliance on shades of character motivation influence western drama up until the current day.