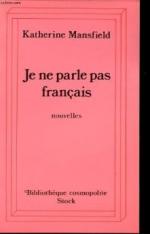 "Je ne parle pas francais" is first and foremost a revelation of the character of Raoul Duquette, the narrator. In the first half we encounter him sitting in a cafe, musing about himself, his world, and other people. Raoul is a fraud; he calls himself a writer, but as readers learn more about him, they become aware of his real business in that cafe.

He is waiting; the others, whether they be women or men, always make "the first advances."

Midway through the story, Raoul recalls Dick Harmon. When they first met, Raoul was obviously attracted to Dick. They became fast friends and went everywhere together, but Dick had the disturbing habit of backing off.

As Raoul notes, when they were out together with "a little woman," Dick would depart "just when she would not expect him to get up and leave her, but quite the contrary." Eventually...