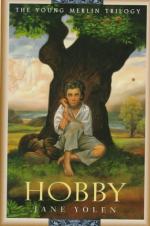 Jane Yolen
This Study Guide consists of approximately 12 pages of chapter summaries, quotes, character analysis, themes, and more - everything you need to sharpen your knowledge of Hobby.

In Hobby, Merlin travels from the New Forest through an area of ancient ruins to a medieval trading center. There, he joins the company of Ambrosius and Viviane. Yolen takes care to depict an authentic May fair and to depict the people and buildings as they would have appeared in Merlin's day.

The problem of a tower collapsing because of leaking Roman plumbing underneath is a nice touch, because the people of the era would have had to work with Roman plumbing and buildings in most cities of Romanized Britain. The Romans would have abandoned Britain less than a generation before the events in the novella.

More summaries and resources for teaching or studying Hobby.

Hobby from Gale. ©2005-2006 Thomson Gale, a part of the Thomson Corporation. All rights reserved.