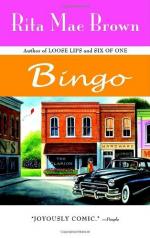 Rita Mae Brown
This Study Guide consists of approximately 6 pages of chapter summaries, quotes, character analysis, themes, and more - everything you need to sharpen your knowledge of Bingo.

Bingo revisits Runnymede, a small community introduced in Six of One.

The town seems poised on the brink of change, as the outside world intrudes by buying the local newspaper. Even so, people seem reasonably tolerant of others, with forgiveness being an important element in the fabric of community life. Discussion could begin with the issue of forgiveness. Are the people too forgiving? Should Regina not be angry with Nicole? Can grudges be dropped as easily as they are in Runnymede?

1. What do you think about Nicole's idea about blue dots indicating a woman's lesbian tendencies? Is this Brown speaking through Nicole, or is it strictly a matter of Nicole's characterization?

That is, is it something that represents Nicole's character but not necessarily Brown's personal opinion?

2. Is evil depicted realistically in Bingo? Does the novel present too sentimental a view of people's ability to forgive?

More summaries and resources for teaching or studying Bingo.

Bingo from Gale. ©2005-2006 Thomson Gale, a part of the Thomson Corporation. All rights reserved.