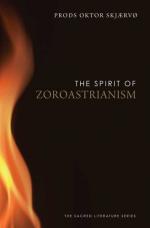 This encyclopedia article consists of approximately 37 pages of information about Zoroastrianism.

Zoroastrianism, established at least 3,000 years ago, is the religion of pre-Islamic Iran. It survives in Iran (where followers are called the Zardushtis) and in India (where they are called the Parsis), as well as in diaspora communities around the world. The term "Zoroastrianism" is derived from the name of the founder, Zoroaster (as he is known in Greek; his Iranian name is Zarathustra). The Fravarane, a confessional text in the ancient Iranian language of Avestan, identifies the religion as the worship of the god Ahura Mazda (Lord Wisdom) according to the teachings of Zarathustra.

In Iran Zoroastrianism traditionally described itself as either the "Good Religion" or as Mazdeanism (from Ahura Mazda). It was the state religion of the two great pre-Islamic Iranian dynasties, the Achaemenids (550–330 B.C.E.) and the Sasanians (224–651 C.E...

More summaries and resources for teaching or studying Zoroastrianism.

Zoroastrianism from Gale. ©2005-2006 Thomson Gale, a part of the Thomson Corporation. All rights reserved.